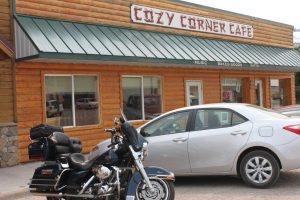 Today seemed to be a slow day in the office, or maybe I was just wishing it was. I decided to take a couple hours after lunch and drive to Fairfield, MT and do some pie research.

Fairfield is a small town about 36 miles from Great Falls. The town has about 700 people, many involved in agriculture. This community proudly states they are the Malting Barley Capital of the World. And, believe me, there is a lot of malt barley grown there. A massive irrigation system, Greenfields Irrigation, delivers water to all those barley fields so yields are high.

We hope to put together a pie trail throughout Central Montana, a fun way to showcase some of the great restaurants serving homemade pie. And…making homemade pies.

As I drove in to Fairfield I was amazed at how pretty the town looked. There were flowers in all of the planters on the streets and even US flags all down the main street. Then I saw a banner welcoming people to Fairfield’s annual event called Swim Days, a fundraiser for the town’s swimming pool.

It’s always great to have some one-on-one time with the pie baker at the restaurant and when I arrived they were really busy, especially because of their annual event. I repeat, really busy!

The pie I saw being created was tripleberry with a layer of vanilla pudding (yes, homemade pudding), then the homemade tripleberry filling, then it was topped with real whipped cream. What a delight! 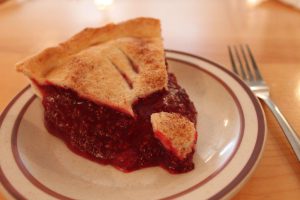 I asked what the local favorite pie was and Michelle said they all sold well, although favorites changed a bit seasonally. Then she said she thought chocolate cream was probably their largest seller.

They also own Golden Harvest Cafe in Dutton, MT and she said the best seller there was strawberry rhubarb.

Today’s choices at the Cozy Corner included tripleberry, red raspberry, peanut butter and peach. I decided to try red raspberry and I was not disappointed. Yum.

The Cozy Corner is open Monday – Saturday from 6:30am to 3pm with longer hours until 8pm on Thursdays and Fridays.

If you are traveling along US Hwy 89 watch for Fairfield and…time your stop to have some homemade pie at the Cozy Corner. Well, anytime is pie time in Central Montana!