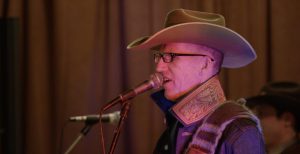 My favorite yodeler is Wylie Gustafson of Yahoo fame and he and his band, The Wild West, were performing an evening concert to kick off the Montana Winter Fair weekend. That was enough to get me to pack my bags and drive to Lewistown.

The concert was held in the Grand Hall of the Eagles on Main Street. Thank goodness I had a ticket because I soon found out that the concert was almost sold out and they expected people to buy tickets at the door too.

Wylie was in rare form. His hometown is Conrad, Montana and he knew the type of crowd he had – farmers, ranchers and hard working folks. He writes most of his songs and the crowd loved him. There were a few dancers during the first songs but when he started singing The Hi-Line Polka that dance floor filled! I love that song and if I would have had a polka partner I would have been dancing.

The next day I was up early and drove to the Fergus Fairgrounds where most of the day’s events would be held. 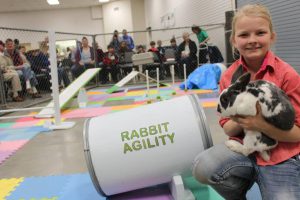 First event of the day was Rabbit Agility. Hold on, I’ll explain. This event is very similar to a dog show where there is a course the animal goes through with encouragement from it’s owner.

This was a double-dose of cute!

Rabbit Agility is a 4-H program and the kids and their rabbits had practiced the course. Many of the kids got down on their hands and knees to encourage their rabbit to go through hoops or over a small fence.

There were different breeds of rabbits and I soon lost track of who had what when these excited kids were telling me about their rabbits.

Families cheered on the rabbit handlers and everyone applauded after each rabbit’s performance.

I wandered through the trade show and marveled at the variety of displays. Hand made candy (yes I sampled and bought), beautiful quilts, soaps, cowgirl scarves and many more items. 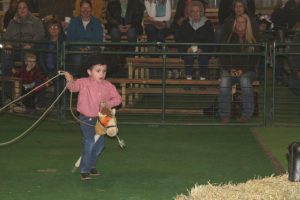 I wandered to another building with an indoor arena for the Kids’ Stick Horse Rodeo.

There were 71 entrants and it looked like most of the contestants were in the 4 – 8 year old range. The bleachers were filled with parents and grandparents, many with cameras to capture the moment. There were several categories for this competition but most involved either roping a set of steer horns or pushing a haybale over.

All contestants were winners and after their “ride” they headed to the prize table to pick out their winnings.

Kudos to the Judith Basin BackCountry Horsemen for coordinating these 71 kids and their stick horses!

To sum up the Montana Winter Fair, it is very similar to a county fair held in the summer but this is held each January.

I enjoyed every event I attended and from a bit of people watching I’d say everyone was having a good time. You just might want to put this on your calendar for January 2018.