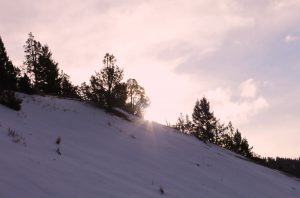 Early yesterday morning I was pointing my car south of Great Falls on US Hwy 89. My destination was White Sulphur Springs, MT about 100 miles south.

The drive is beautiful any time of year.

Around nearly every corner there is a photo op, and, my camera was easily accessible the entire route!

On this highway, you travel over Kings Hill Pass, the highest maintained mountain pass road in Montana.

Since I left plenty early I was able to see glimmers of the sunrise coming over the mountains. I must admit, I took about 6 or 7 shots of this and I was glad I had started early!

As I approached White Sulphur Springs I saw some Angus cows in a white snow-covered field. That was also photo-worthy so I stopped and captured that scene! 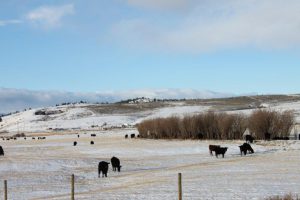 Little did I know that three hours later as I was returning to Great Falls, those same cows would be on the move, heading north a mile or two right on the highway and to the other side of the road.

After a meeting in White Sulphur I turned down an opportunity for lunch with some friends. My tummy said “stay for lunch, that apple on the front seat of the car isn’t going to fill you up”.

The schedule of work playing over and over in my mind said “you have two projects to finalize in the next day”.

Well, the voice of my schedule won out and away I drove,

The bright side of this story is that just north of town I came upon several cowboys moving cattle (yes, the same cows I saw earlier).

I drove up behind a truck flagging traffic and I believe he wanted me to stay behind him so I would not scare the cows. Well, I wanted photos so I grabbed my camera, thankful that the bigger lens was on it because I felt that might impress the driver. 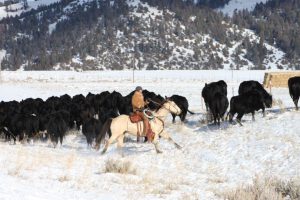 I told him I would be very cautious but it really was a pretty sight and I wanted to capture it on camera. Well, I got through and carefully drove up behind the cattle and cowboys.

My first thought was that I wished the cowboys were dressed like, well, magazine ad cowboys! You know, wearing a cowboy hat with a colorful western-style shirt.

I opened my car door and stepped out to start taking photos. After a minute or two I felt a twinge of guilt for wishing the cowboys were dressed differently.

The outside temperature gauge in my car said 22 degrees and there was a very crisp wind. Warm woolen caps with earflaps, followed by many layers of other clothing definitely proved to be the wisest fashion statement of the day.

The cowboys were whooping, hollering and whistling at the cows…my lips were so cold I couldn’t have whistled!

Traffic going both ways was stopped and, from the looks on drivers as I finally drove through, everyone was enjoying this Montana scene. 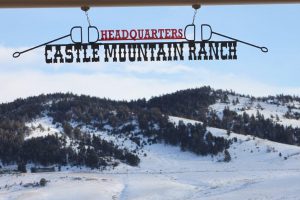 I waited awhile after the cowboys got the cows off the road and on the move through the ditch. Their destination was the Castle Mountain Ranch so they didn’t have to travel far.