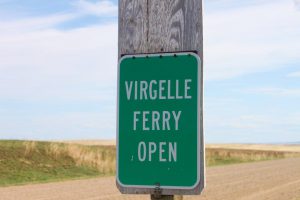 Another rite of spring – the three free river ferries on the Upper Missouri River begin operating!

The ferries are operated by the local county government -both Chouteau County and Blaine County coordinate the river ferries.

An operator usually lives right close to the river and when you drive up there is a buzzer to signal the operator that you need (or just want) a ride across the river.

The other day I found the brightest red pickup I could, asked the driver if he would head over to the Virgelle ferry (he said yes!) and I took some photos.

Central Montana’s river ferries are located at Carter, Virgelle and near Winifred (called the Stafford-McClelland). Two of them are inside the Upper Missouri River Breaks National Monument and the other (Carter) is about 20 miles outside of the monument.

For some folks the ferries are an incredible time-saver since they would have to take a much longer route to get to their destination. 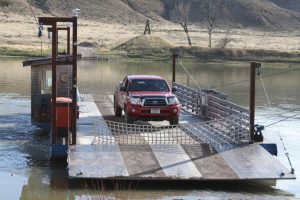 For me, I go out of my way, add on extra miles, just to ride the river ferries!

If you’ve never put your trusty wheels on what looks like a Huck Finn raft, give it a try!