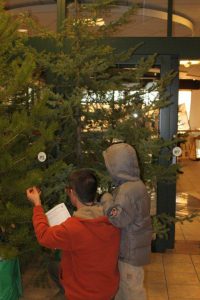 Last weekend I went to the Lewis & Clark Interpretive Center in Great Falls for their “Evergreen Lewis & Clark” open house.

There was quite a variety of trees displayed in the foyer and also the lobby of the interpretive hall, all cut from areas in the Lewis & Clark National Forest in Central Montana.

I took my granddaughter to this event and it didn’t take me long to realize how limited my knowledge was when it came to trees!

We received a sheet of questions when we entered the foyer and we were supposed to determine which trees had certain characteristics. Wow, I didn’t realized there were so many options! Some of the questions were – which trees have leaves like scales, which have needles connected one-by-one or mostly two in a bundle, cones half-opened or closed, needles that are square, needles that are flat with dull tips, etc.

I managed to answer the question about the tree with flaky bark and branches with small blue colored berries (Rocky Mountain Juniper). Actually, it was a shrub and not a tree. 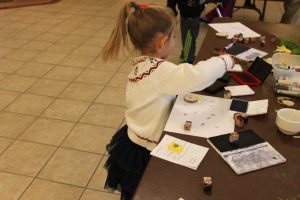 For kids, especially the 4-year old kind, the event was pretty interesting.

Tree cookies (slices of branches about 1/4 inch thick) were available for decorating with inked stamps and markers. The stamps featured insects, butterflies and animal tracks. A small hole was drilled in each tree cookie with yarn tied so it could then be hung on a Christmas tree.

After decorating a couple of tree cookies, we checked out the gift shop, then walked through the lower level interpretive hall.

It was a fun and educational day for both grandma and granddaughter.