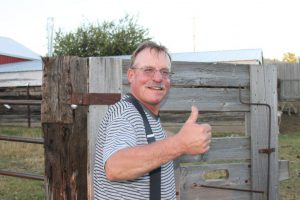 A few weeks ago I was driving north from the Bear Paw Battlefield towards Chinook, MT. On the west side of the road (in a fence) I saw a big brown llama, looking like he owned the place.

I called my brother and asked who was using llamas around there and he informed me it was our cousin Kelly. Well, dang, that was my “in” to get up close to a llama for some photos!

After a quick phone call to Kelly I was in my car and heading to his place, camera on the front seat of my car.

Kelly has a small band of sheep and I was hoping they would be close to the barn. I was told that the llama (Fred) would probably be pretty close to the sheep.

It was still hot that evening and Kelly explained that the sheep were hot too, as a result, not very active. Well, I didn’t want them active because its easier to take photos of them if they stand still!

We walked up to the barn and as Kelly opened the gate to the corral he gave a “thumbs up”. Fred and his flock were right there. It’s as if they knew I was coming! 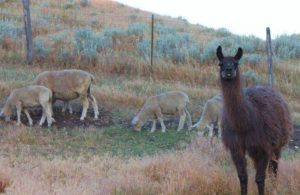 The sheep are mostly Columbia/Targhee breeds. They seemed glad to see me, or, maybe they were thinking Kelly was bringing them treats.

Fred, the regal looking llama, was “on guard”. I’m pretty sure he had to check me out before he determined I was not a predator.

Coyotes are the real predators here and there are plenty of them in this area. Domestic dogs can cause havoc with sheep too.

Kelly’s sheep and Fred have plenty of room to roam, amid hills and low spots so you wouldn’t always be able to keep an eye on things. That’s where Fred comes in. I learned that a llama’s front hooves are split in the center and they would use their hooves to defend themselves and their flock. As I gazed at Fred I couldn’t decide if his legs were scrawny or in good shape. I would err on the side of caution if Fred felt I was a predator though. He can cover a fair amount of ground quickly, even though he looks out of balance with thin legs and a bulbous middle.

After awhile I decided Fred’s “middle” was probably mostly hair or fur and that he was in pretty good shape. 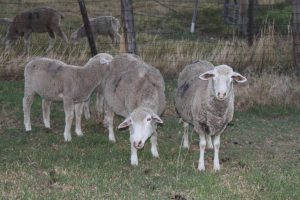 I was able to get some nice photos of both Fred and the sheep. It was such a fun evening and, as I left, I told Kelly I was going to blog about him, his llama and sheep. He looked at me and said “that’s a good thing, isn’t it?”.

Kelly said he doesn’t own a computer but I think  people will enjoy learning about Montana’s agriculture and our way of life.

Thanks to my cousin for some fun memories!