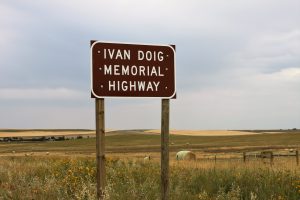 I had only met author Ivan Doig twice but, in those brief meetings, I felt he truly loved the landscapes of his youth.

I was also amazed at how humbled he was by the amount of people that turned out at his Montana book signings to see him, hear him read from his novels and hopefully get his autograph.

Beyond having a great fondness for the landscapes of Central Montana where he was born and raised, he seemed to memorialize those same landscapes in his novels.

Doig’s life began in White Sulphur Springs, one of the southernmost points in the 13 county tourism region known as Central Montana.

He lived in the White Sulphur Springs area about six years and then moved with his father (after his mother’s death) further north along US Hwy 89 near Dupuyer. Dupuyer is almost the northernmost point in Central Montana so Doig was experiencing the area from south to north.

Both towns that Ivan Doig called home are on US Hwy 89. That highway remains a 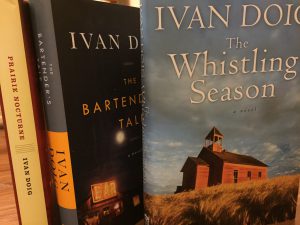 beautiful scenic drive of varied landscapes and today, a portion of it has been named the Ivan Doig Memorial Highway.

I’ve read the majority of Doig’s novels and even though the names of towns are changed, if you are familiar with the area you can visualize the locations.

Many of Doig’s books are set along the Rocky Mountain Front and former school classmates in that area led the effort to have the stretch of highway that passes through Dupuyer named after him.

It’s a touching tribute to a man who was able to convey the vastness, harshness and beauty of the landscapes to readers, all while weaving the plot of a story.

Each time I drive by the Ivan Doig Memorial Highway sign I think I should re-read some of his novels. Let’s change that sentence to “I am going to re-read my favorite Ivan Doig novels!”