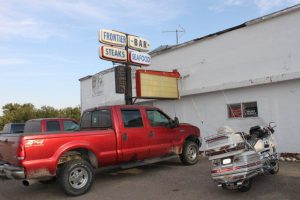 We only covered about 60 miles between courses but I was dragging. We decided to eat dinner early, then head back to the motel and get some much needed rest.

When I suggested to my golf buddies that we might drive about 10 miles out of Shelby to a restaurant they were skeptical. Yes, there was a restaurant across the street but I hadn’t been to the Frontier for a lot of years.

As we drove up to the Frontier Bar and Supper Club my passengers were even more skeptical. Okay, the outside is not incredibly unique architecture and it’s located pretty close to the highway in the itsy town of Dunkirk east of Shelby. I noticed a fresh coat of paint on the exterior of the building though.

There were a few cars outside and I told the guys that I was sure they would like the food at the Frontier.

Voila! Once you enter the bar, then the dining area, things look quite nice. There is a full bar, separate dining and they even had banquet tables set up for a large group that was coming later that night. 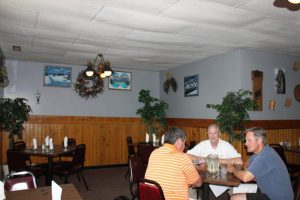 The Frontier is known for their prime rib and steaks but you can also get seafood and pasta dinners.

Here’s a photo of the dining area, fairly small but it would probably seat 30 people. You can also eat in the bar area.

We thoroughly enjoyed our dinners and the opportunity to dine in this unique local establishment.