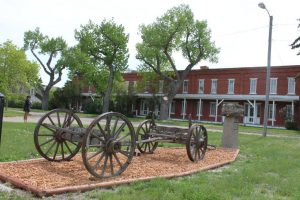 We’ve been working our way towards Havre and our next stop on US Hwy 87 is at Fort Assinniboine. The Fort is about two or three miles before you get to the junction of Hwys 87 and 2. Ironically, many people drive right by this large collection of buildings and don’t even realize what it is.

There is a brown wooden historical sign on the highway telling about Fort Assinniboine but the most prominent sign tells you that it is part of MSU Ag Experiment Stations, located across Montana to test different crops. An agreement between the Fort and MSU allows for guided tours of the Fort.

Now – I’d like to clarify the name and spelling. This fort is named Fort Assinniboine. When you spell the Assiniboine Indian tribe there is one less “n”. When you look at the original sandstone sign erected (and now encased for protection) at the entrance to the Fort is says Fort Assinaboine. Tough word to spell!

There are 14 original buildings still standing at Fort Assinniboine, mostly constructed of bricks made locally. Its a wonderful example of late 19th and early 20th century military architecture. 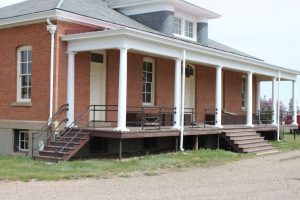 After the Battle of the Little Bighorn (where Gen. Custer was) and the nearby final battle with the Nez Perce, Fort Assinniboine was established to protect this area. It was the largest military post in Montana Territory and also had a large contingent of Buffalo soldiers.

Guided tours of Fort Assinniboine start from the H. Earl Clack Museum located a few miles away in Havre at the Holiday Village Mall.