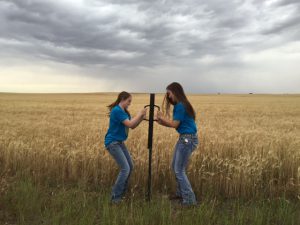 Let’s just say this project has been a long time dream.

Each time a visitor would be traveling with me on roads with crops I’d get asked what was growing in the field.

If it was spring and I could see lots of green shoots I’d guess it was winter wheat. If it was blooming yellow I assumed it was either mustard or canola. Fast forward a month or two into the season and I couldn’t even begin to guess!

To label crops would take an army of volunteers, not just for the initial round but for the long-term. Crops change, they rotate, new grains and pulse crops are planted – this isn’t a one-time project. 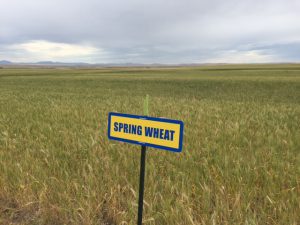 Signs need to be put up in the spring when it is determined what crop will be in the field and then the signs need to come down in the fall after harvest.

Enter the FFA (Future Farmers of America) chapters! In high schools and some colleges, participants in these dedicated groups become involved in agriculture in many ways. For certain, some will grow up to be producers but many will have jobs working with the ag industry.

After meeting with the Electric City FFA advisor in Great Falls some goals were set. Her group would reach out to other areas in the United States where crop labeling had been done successfully.

The FFA kids really became an army of volunteers – eventually contacting landowners for permission and then getting signed agreements so the crop ID signs could be placed on their property. 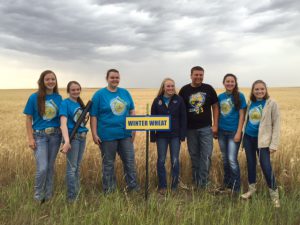 Simple signs were designed and made by a sign shop and the kids chose a blue background with gold lettering. Hmmm…that looks a lot like the FFA colors!

The day we had all been waiting for finally arrived – signs were done, metal posts were loaded (along with a post hole digger) and about eight FFA members were on hand to begin installing posts and signs.

Three different signs went up just a few miles east of Great Falls on Hwys 89, 200 and 3. In a short distance three crops were labeled including spring wheat, field peas and winter wheat.

This project will be more than signs labeling the crops though. The FFA chapters have researched the various crops and that information is being built into a downloadable free app called Crop InFARMation.

Information includes growing practices, varieties of crops and uses for the crops after they are harvested. We also hope to have some interviews with producers talking about their crops.And, it 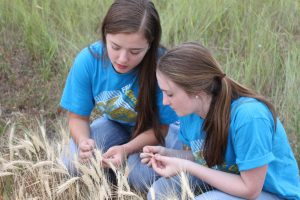 would be nice to find places where locally grown crops can be purchased or served in restaurants or breweries or retail establishments.

So much potential! We have come a long way since this idea first started and the project can only grow.

We hope the traveling public (and Montana residents too) like the Crop InFARMation project. Now,let’s watch it grow and spread throughout the entire state!

And, be watching for the release of a new app for your smart phone titled Crop InFARMation!