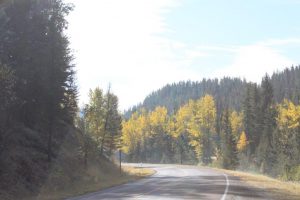 Just a couple days ago I was driving to a meeting in White Sulphur Springs. My camera was right beside me and I hoped to get a glimpse of some fall foliage.

I was traveling on the Kings Hill Scenic Byway, a 71 mile stretch of US Hwy 89. The scenic byway runs from about 25 miles east of Great Falls to just a couple miles before White Sulphur Springs.

When you travel the byway you drive through the Lewis & Clark National Forest and the Little Belt Mountains. The U S Forest Service gave this stretch of road the scenic byway designation and it is certainly worthy of it.

When I first turned south on US 89 there was an eerie mist coming off the pavement. Our weather has been, well, just a little bit of everything lately – beautiful sunny fall days and then we’ll have a crisp, chilly day without much sunshine. I had heard that the Little Belts had seen a “dusting” of the winter white stuff so I didn’t know what to expect.

I hadn’t gone far when I decided I had better stop and take a photo. Little did I realize that I would repeatedly want to stop and do this! Fortunately I had enough time for several stops but it’s easy to get carried away taking pictures and lose track of time. 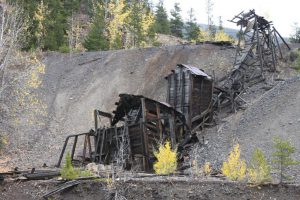 This area was settled with miners quite a few years ago and you can still see remnants of that history just north of the town of Neihart.

Silver and lead were mined near Neihart around 1881 and the town was named for one of the prospectors. About $16 million of silver was mined between 1882 and 1929.

There was a smelter at the now-ghost towns of Barker and Hughesvile. Neihart was also a large producer of zinc to aid the war effort during World War II.

If you are driving south from Great Falls you get to the community of Monarch first. It was also once a mining community and several mines were named King, Czar, Emporer, Rex and Sultan. They kept that “theme” and named the town Monarch!

Both Neihart and Monarch have lodging and dining. Neihart even boasts an “Inconvenience Store” and I wish I would have stopped to take a picture of their sign.

I only have photos taken from the highway but the real beauty of this scenic byway is when you get off the main route. 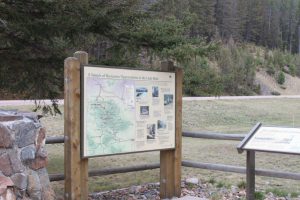 Campground signs, hiking signs, winter recreation (skiing, snowmobiing, X-C skiing and snowshoeing) and scenic overlooks dot the route. The Belt Creek Ranger Station is adjacent to the highway and they have information covering all of the recreation options on the Lewis & Clark National Forest.

It took me a long time to drive this route and I could have stopped many more times to explore. I’ll share some more photos and trivia about the Kings Hill Scenic Byway in a future blog post.