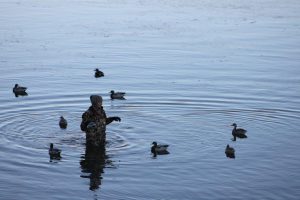 I was out for an early morning drive recently, trying to capture a beautiful sunrise. I was successful at that and, as I was driving back to Great Falls along the Missouri River, I saw a couple of guys out waterfowl hunting.

The first hunter I saw was a young guy wading in the chilly waters of the Mighty MO. Brrr! He looked like he was dressed for the weather and the activity though.

At first I wasn’t sure just what he was doing. Then, I realized his job was to put out the duck decoys, probably a task assigned to him by the older guy in the boat!

Nearby was a camo-designed boat, almost the size of a canoe. It looked like it was built for one person – I only saw one seat in the cute little boat.

I figured these guys were just getting ready for their hunt and, from the looks of the decoys, they were after ducks.

I had just seen a few around the bend but I didn’t want to scare anything off so I just took some photos and (quietly) got back in my car. 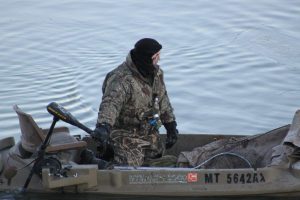 Ducks really are migratory but many seem to stay in the area all winter.

Montana Fish, Wildlife & Parks manages our hunting and it pays to read the regulations carefully.

In Central Montana we get two bird flyways – the Pacific Flyway and the Central Flyway – which gives us a great variety of birds. Rules vary somewhat by the flyway pattern.

The 2012 waterfowl season in Montana opened September 29 and, based on the flyway, will close either January 3 or 11.

The daily bag limit of ducks or mergansers for the 2012 season is 7. But, the regs say that shall not include more than 2 hen mallards, 2 pintails, 2 redheads and 1 canvasback. It pays to know your ducks and watch what you are shooting! 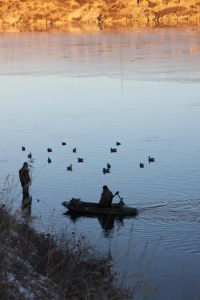 It seemed too cold to be out hunting the other day but the sun was up and shining beautifully on the far river bank.

Now, if I could have positioned these two hunters on that side of the river, with the warm sun shining on them the entire feel of my photos would have changed!