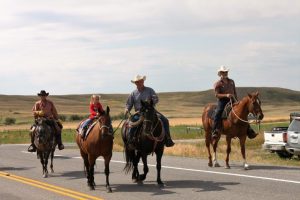 Saturday morning – a cup of coffee, gas up the car, remember my camera – and I’m on the road. My destination was Dupuyer, Montana, a small town about 85 miles northwest of Great Falls on the Rocky Mountain Front.

There are two routes to get to Dupuyer from Great Falls. I chose to take US Hwy 89 on the way to Dupuyer so I could be closer to the foothills of the Rockies. That route took me through Vaughn, Fairfield, Choteau, Bynum and then Dupuyer.

It’s called Grizzly Day for a reason. This little community does see grizzlies coming along the creek that runs through town in search of food.

You could spend the entire day in Dupuyer experiencing their annual celebration but I arrived in time for the parade which pretty much closes Highway 89 for about 25 minutes. 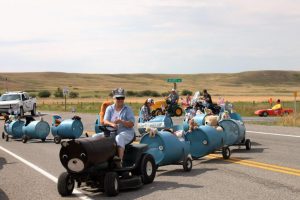 I stood next to some motorcyclists from North Carolina who said they asked about a route to “get around the parade” and then back on the highway. They decided to stay and were very pleased that they did! The comments they said made me feel so good. They commented on the friendliness of locals they had visited with in Montana. They loved the weather (low humidity) and said US Hwy 89 was indeed a fun ride. Their destination was Glacier National Park but last Saturday they were darn glad they stopped to watch this fun parade.

The parade had great variety – the little train made of old barrels is a favorite of mine and I think the lady driving it had as much fun as the kids who rode in it later on that day. It was stuffed with teddy bears, a tribute to this town that sees a lot of the real kind. 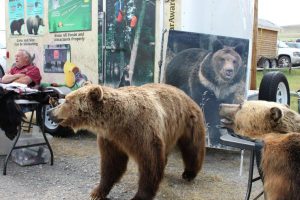 After the parade I visited with more people and strolled by the grizzly bear awareness display. That mounted griz was looking pretty life-like standing on the side of the highway. A bouncy house was set up for kids and from the sounds coming out of it they were a-bouncing!

It didn’t take me long to get to the food aisle.

A Scoop in Dupe looked enticing (ice cream in Dupuyer) but I was picking up the aroma of Indian tacos coming from a food truck (bus) at the end of the aisle. Awww…writing about this makes me want that taco on fry bread all over again! Yummy in my tummy and served with a million dollar smile, just perfect.

I enjoyed that Indian taco immensely as I listed to the Milk River Band play some good country tunes.

There was more to come including a Human Foosball game. I’ve never seen that but I needed to scoot back home for another commitment. 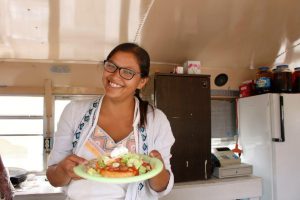 Small town festivals and celebrations can be found throughout Central Montana during the summer.

If you get the chance to experience one of Central Montana’s local events, don’t hesitate.

I predict that you will be warmly welcomed by the locals and will come away with a great appreciation for life and comaraderie in our communities.