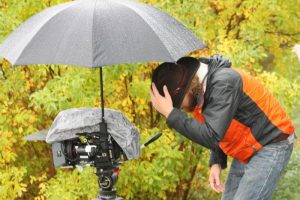 Some background: Let’s think way back to the early 1800’s when artist Karl Bodmer was born in Zurich, Switzerland. When he was about 23 years old he moved to Koblenz, Germany. Bodmer’s uncle was an engraver and taught his nephew art. Karl Bodmer ended up learning a nice variety of media and became a printmaker, lithographer, illustrator and painter.

In 1833 Karl Bodmer and Prince Maximilian du Wied arrived in St. Louis, Missouri and began an arduous 2,500 mile steam and keelboat trek up the Missouri River. Bodmer’s task was to sketch scenes along the way for the Prince.

Fast forward to last Friday and I was standing on the river levee in Fort Benton, Montana watching a replica keelboat launch near the Old Fort in Fort Benton.

An assorted cast of characters stood ready to board the keelboat and travel upstream, just as Bodmer and Prince Maximilian did and just like the Lewis & Clark Corps of Discovery did in 1804-1806.

A German film crew was also onsite tracing portions of the route that Prince Maximilian (from Prussia which then became part of Germany) and Karl Bodmer did. 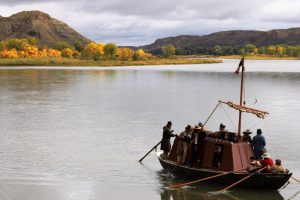 Before I left for Fort Benton I checked the weather. It didn’t look great for filming. In fact, it looked like rain all morning. And, the weather forecast was incredibly accurate that day!

I’m sure Lewis & Clark, and also the Prince and Bodmer, faced some less-than-sunny weather so true to form, our show went on!

Umbrellas were anchored over the expensive camera equipment, slickers came out and the reenactors just got soggy. Some had wool clothing on, which was typical of the era, and it was pretty heavy once it became rain soaked.

The keelboat went upstream first, then downstream, then repeated that about eight times. Not all of the crew on the keelboat were oarsmen but those that were deserved a massage at the end of that day!

An actor portrayed Karl Bodmer in stylish dress, top hat, sketchpad and all.

The time of year when Bodmer and Prince Maximilian were in the area was a bit different from fall, but the riverbank foliage made a beautiful backdrop for the keelboat.

And those soggy reenactors? They had a grand time!

About half of the Bodmer lithographs of the Missouri River voyage have been displayed in the art gallery at the Old Fort in Fort Benton. They are beautiful and I’d love to see them all.

I’ll be eager to see the final video of what the film crew termed a “docudrama”. It will air on a German TV station with a reach between 4 – 5 million viewers.

And, I’ll be able to say I saw a portion of it being filmed!