Even though I crawled back in bed for a few more zzzs after taking sunrise photos, I was still up early. Virgelle was quiet and serene. I usually go for a walk in the morning but today I was on a break from routine.

As I got closer to the Merc, I could smell somthing cooking, possibly bacon or sausage. I rarely eat breakfast meats but they sure smell good when they are cooking!

Our dinner the night before was late so I didn’t feel very hungry…until I walked in to the kitchen of the Virgelle Merc. I spotted the coffee and then I was greeted by Cat (short for Caitlin), our morning chef extraordinaire. I’ve met Cat before and she strikes me as a get-er-done gal, always positive and ready to roll up her sleeves and do the job.

Her job today was preparing breakfast for our group. I’m not sure what time Cat gets up but she was far more awake than I was! I think I usually wake up pretty cheery but (note to self) Cat’s warm smile made me realize that I could really be a little more alive at this time of day! 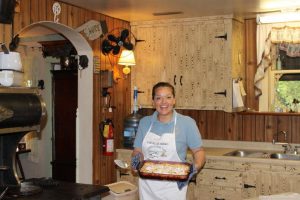 The Merc has a wood-burning cookstove although Cat said she used the regular oven to prepare our breakfast today.

Chokecherries grow wild in north central Montana. When I was growing up, we always had chokecherry bushes either in the yard or nearby. Picking the tart berries was a summer ritual. Then my Mom canned the juice and she could make either syrup or jelly when she wanted it.

If anyone wanted the recipe for our baked stuffed French toast, the apron Cat was wearing had it embroidered on it! Those aprons were for sale and, even though I don’t wear aprons, I’m regretting not buying one.

The attention to detail for breakfast was impressive. Everyone in our group took photos of the food and you could hear people saying – wait, don’t eat that, I want a picture of it. OK, Cat probably thought we were crazy but I hope she took it as a compliment to her morning labors. 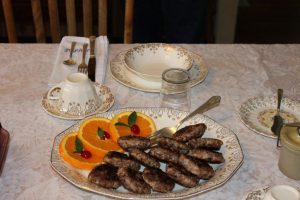 Here’s a photo of just one serving platter, almost too pretty to eat. But, guess what, we did eat! And several of the serving platters went around the table a couple of times. Well, we didn’t want Cat to think we didn’t appreciate all of her hard work!

A very yummy way to start our day.