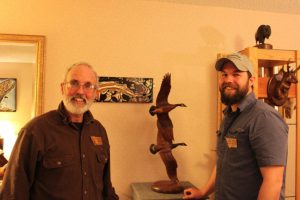 Gosh, two art shows in one day and I’m exhausted. Hard to imagine how I’ll hold up after visiting about a half dozen more!

Tonight I went to the Great Falls Holiday Inn where the Western Heritage Art Show & Sale had their preview night. I actually went to this show twice tonight – the first time my camera battery died, darn, so I took a break, recharged the battery (and myself) and went back.

The Western Heritage Art Show & Sale poster in the lobby of the Holiday Inn said they had 60 artists in rooms. Sleeping rooms become artists’ showrooms. All of the standard furniture is removed and stored during the event and panels are put up to hold the artwork for sale.

I know several of the artists at this show and I decided to meet some new ones instead of just visiting with long time friends. So, off I went to introduce myself and learn about the artists and their work. 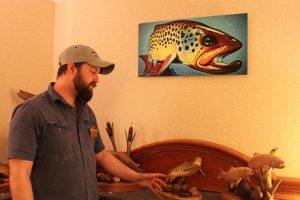 The first room I entered had two guys sitting there and I wasn’t sure which one was the artist. Well, as luck would have it, they were both artists, father and son, sharing the room.

James Meredith (father) does wildlife sculpting and right away I saw several birds that he had for sale – an eagle and several geese. Beautiful work!

I asked James if he taught his son wood sculpting. He looked at Matt and said, well, he showed him a few things!

Matt Meredith (son) is also a wood sculptor and I saw several varieties of fish that he had done.

Matt also takes photos of his sculptures and prints them on aluminum. A unique idea and very nice.

Both James and Matt are from Livingston, MT.

The next artist I met was Craig Edwards, photographer from Big Sandy, MT. It’s a small world – I have met Craig’s wife before at her antique store in Big Sandy! 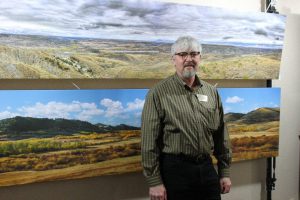 Craig’s photography speaks well of the area where he lives.

The photo above it is a great image showing the Upper Missouri Breaks in the area northwest of Winifred, MT.

You could look at these beautiful photos for a long time (and, imagine yourself being there!).