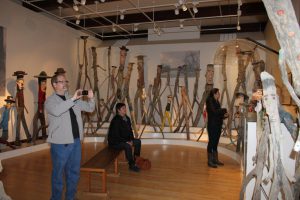 Lots of snow came falling on Central Montana today, actually some yesterday and last night too.

I decided it was a good day for inside touring and Paris Gibson Square Museum of Art is on my route to and from the post office.

Today there were lots of “young” artists in a class that looked like pre-school children. I’m not sure what they were working on but it was good to hear young voices in this art museum.

My favorite room at Paris Gibson Square is one where I can simply sit and look for a long time. There are even benches in the center of this room and I assume they were put there because there is just so much to see.

The room is an installation of works by a self-taught artist named Lee Steen.

Lee lived near Roundup, MT, moving there from Kentucky when he was about 7 or 8 years old. He also lived in the Central Montana towns of Havre and Shelby but moved back to Roundup in 1942 and lived next door to his brother. 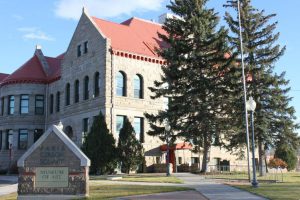 Steen created what the museum calls “tree people”. He used what most of us would consider trash and then decorated tree limbs that resemble people.

I recognized a few old-time brands that were on coffee cans and Steen cleverly used these as belt buckles or other decorations for his tree people. Bottle caps, flower pots, twigs – all were used in an era when recycling wasn’t that prevalent.

Three days ago I took this photo of the outside entrance to Paris Gibson Square – today I did NOT take an outside photo! It’s hard to believe the sky was that blue.

We have great outdoor recreation in Central Montana but some days a warm and relaxing visit inside Paris Gibson Square Museum of Art in Great Falls is just what the doctor ordered!