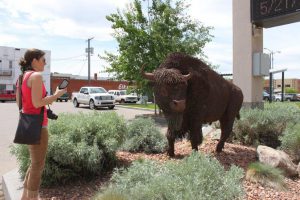 A few weeks ago I was in Havre and took this photo of a sculpted buffalo in Havre’s Town Square.

In case you are wondering, Havre’s school mascot is not a buffalo (its a blue pony) but a local group worked to place this buffalo sculpture in a visible location to beautify the area. Once a rather run-down looking block in the center of Havre, this area was transformed to be a Town Square.

Weekly events are held at the Town Square in the summer including Sounds on the Square (music groups playing one day a week after the typical workday ends) and local Farmers Markets.

US Hwy 2 passes through Havre’s downtown district and if you are on the highway you’ll drive right by this big buffalo.

We stopped to see the buffalo right after coming from a local Havre attraction called Wahkpa Chu’gn, or sometimes referred to as the buffalo jump. So…we were thinking buffalo.

Just today I was walking the Rivers Edge Trail in Great Falls on my lunch break and snapped a photo of this buffalo overlooking the trail. 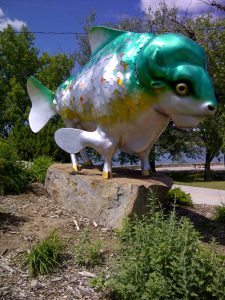 Several years ago a contest was held to design large buffalo and then they were auctioned off. Quite a few buffalo stayed in the area and are placed around Great Falls.

This big guy is at the intersection of River Drive and Central Avenue West where the bridge crosses the Missouri River.

Over a couple hundred years ago Lewis & Clark noted the immense herds of buffalo roaming the plains of Montana. Well…your Montana vacation might include seeing a lot of buffalo too, just a little different type!