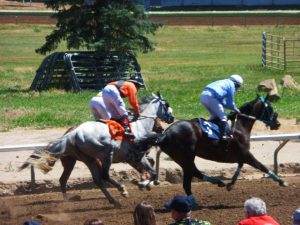 I don’t want to disappont anyone with my still-limited knowledge of horse racing. But, I managed to learn a little this weekend at the races sponsored by the Great Falls Turf Club. Probably the most important thing is, it’s all a game of chance, no matter how much you weigh the odds!

Horse racing had been absent in Great Falls for three years until last summer when members of the Turf Club worked to get back on the race schedule.

Races a week ago had more than 3,000 fans at the betting windows wagering more than $150,000 during the two-day race meet. This last weekend saw numbers almost that high again. That’s a tidy sum of cash and an impressive amount of people!

I opted to cut my losses before they even began and I didn’t bet when I attended the second weekend of racing. I did listen closely to the tips given by the couple sitting next to me though.

The bottom line, it all seems confusing to me. Between the trifecta, superfecta, races for horses who had never won a race, there is a lot to keep track of. The learning curve is steep and I’m at the bottom! 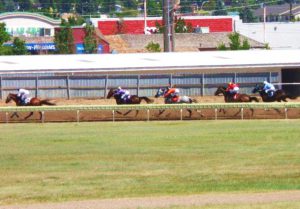 Sunday’s event at MT Expo Park during State Fair had 11 races. Each race had seven or eight horses entered and there was a purse of $7,200 in one race for quarter horses. There were also thoroughbred horses racing Sunday.

I wasn’t able to stay for the entire race card but I came away believing that we had some very excited horse racing fans in Great Falls and also that many people would travel to attend horse races!

Kudos to the Great Falls Turf Club for working so hard to bring horse racing back to the community.

Will I attend the horse races again? Yes, I will but I may keep my wallet closed and just enjoy the frenzy of the race (and the race fans)!