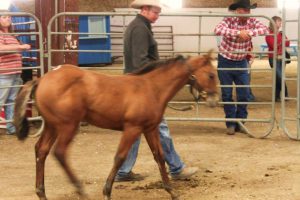 When a friend gave me a personal invitation and a catalog about the Weaver Quarter Horse 19th Annual Production Sale I decided I should put it on my schedule. The event was held this past Saturday in the Livestock Building at Montana Expo Park in Great Falls.

When I arrived I decided to wander around a bit. I didn’t take me long to realize that I could have just sat and watched the colts for hours before they were auctioned to the highest bidder. Playful and cute sums them up best! Bay fillies, blue roan and red roan fillies, bay roan studs, black fillies and my favorite – buckskin fillies. They weren’t all weanlings but those were the cutest.

The Weaver Ranch is located in the Bear Paw Mountains (an island mountain range) near Big Sandy, Montana and was established in 1888. I believe they said they were the sixth generation to work that ranch – some pretty amazing history.

Back to the auction.

There were two guys in the auctioneer’s booth and at times it seemed like they were both talking at the same time. I’m glad I wasn’t bidding because at times I wasn’t sure how high the bid was. 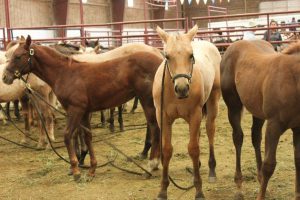 A phone bank was set up to accommodate call-in bids and one spotter stood in front of that just to make sure the absentee bidders had the same chance as those bidding in person.

The auctioneers kept things moving quickly. I watched to see who was bidding and heard one bidder’s number called out several times. There were plenty of random bidders though and it was exciting to watch.

I’ve been to art auctions before but this was my first horse auction.

It was fun to see and I’m glad I went!