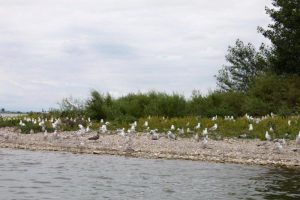 Lake Frances in Valier is known for great walleye fishing. The lake is close and convenient to town. Basically, the city’s streets take you right to the water’s edge. A campground with electrical hookups, bathroom facilities and a playground is right on the shoreline and there is also a motel and bed and breakfast in Valier.

The lake was built for irrigation purposes and it has evolved into also being used as a recreation area. We’ve had plenty of moisture this year, up until the last couple of weeks, so irrigating was just getting in to full swing.

I met two fishing friends who had a boat and it looked like a great day for fishing. The temperature only rose to about 75 degrees and there were very light breezes every now and then. Perfect weather for walleye fishing.

As we took off from the boat launch we drove past a small island filled with seagulls. A tree on the island also had cormorants, large black birds that I learned do not have oil glands. As a result, they need to dry their feathers off between swimming and fishing expeditions or else sooner or later they would get water-logged and sink. 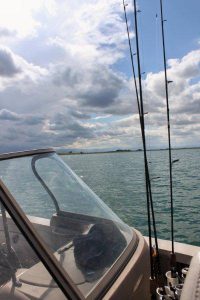 I don’t have fishing gear but my fishing friends said not to worry, they would have everything ready for me. I just needed a Montana fishing license and a desire to catch walleye.

Three fishing rods were ready and after a few pointers I was ready to take up the sport. They had used jigs the day before but today we were going to use nightcrawlers. In fact, nightcrawlers were in short supply at area fishing supply stores so I was sure we had made the right decision about our bait.

Here comes the hard part to believe! After only about five minutes, I had hooked a fish! Lots of excitement, I reeled it in, and they told me it was a perch. Still, it was a keeper and I was excited and thought that maybe, just maybe, today was my lucky day for fishing.

But, it wasn’t meant to be. That was the last fish I caught all day! 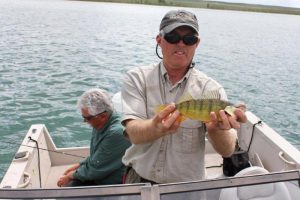 The guys caught several perch of varying sizes the rest of the day. We changed locations a few times, fishing in water depths between 25 and 30 feet (local tip). We only saw two other boats on the lake and I wondered if they were catching fish.

Lake Frances is a large expanse of water so I’ve decided that the walleye were just in other areas that day. And, the optimist in me says, next time I’m there fishing, those walleye will be bigger than ever.

We finished off our day of fishing with a great dinner at The Lighthouse Restaurant on the lake shore.