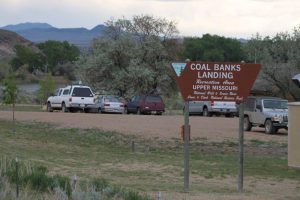 The photo doesn’t fit the news! It was taken during the summer so you’ll just have to imagine snow covering the campsites and ice on the Missouri River.

The Bureau of Land Management has just announced that from December 1 through approximately March 31 (or until the Missouri ice conditions are no longer ice) Coal Banks Landing and James Kipp Recreation Areas are closed.

At James Kipp Recreation Area the road down in to the site also becomes icy. It may be easy going down to Kipp but you may not get back up the hill!

If you want information about the Upper Missouri, the Missouri Breaks Interpretive Center in Fort Benton is open year round. During winter the center is open Monday through Friday. Call 406-622-4000 to reach the Interpretive Center.