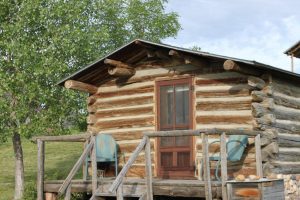 As we turn off US Hwy 87 towards Virgelle, I’m playing the ultimate tour guide. I tell my travel buddies that we will drive eight miles on gravel (it’s a good road) to get to the tiny spot in Montana known as Virgelle.

As you drive towards what is called the Virgelle Merc, you see a large two story building and the sides are covered with corrugated metal. What looks like an old time porch runs the full length of the front of the building.

The Merc contains an antique store, a bed & breakfast upstairs, main floor dining for guests, a check in point for canoe/kayak rental, and it’s also where you check in to rent a homestead cabin or the sheepwagon. Down the boardwalk from the Merc is a restored bank building and you’ll also find antiques in it. 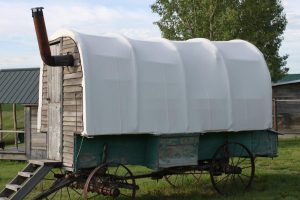 One of our group said he had dibs on the sheepwagon and I certainly wouldn’t have challenged him for that. Sheepwagons would be considered spartan in design and furnishings! But, if that is on your bucket list, go for it.

I chose a homestead cabin and marvelled at just how small these cabins were. When you consider the scarcity of wood on the plains and the amount of work to build a cabin, I suppose I would have opted for less square footage too.

My cabin had a wood-burning stove, a double bed, nightstand and corner table. Oh, it also came with a kerosene lantern but I had cleverly tucked a flashlight in my suitcase.

Nearby is a cabin with an ice-house facade that houses men’s and women’s bath facilities. I like authenticiy but I also like running water!

There are several homestead cabins placed around the Virgelle property, some small like mine, some that are larger. The cabins have come mostly from Chouteau County, the county where Virgelle is located. Considering the age of the cabins and our dry weather, they have had much restoration work put in to them. 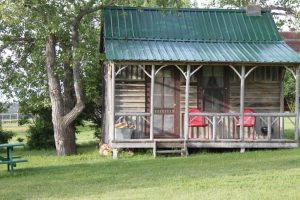 Here’s a photo of one of the larger homestead cabins.

You can see the Missouri River from the Merc and the cabins. The Virgelle free river ferry is one mile down the road. One mile in the other direction from the Merc is a campground and river launch site named Coal Banks Landing.

You really feel like you’ve taken a step back in time when you visit Virgelle – a comment echoed many times by my travel companions.