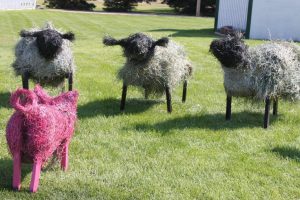 It’s hard to believe that the Montana Bale Trail – What The Hay event has been successfully entertaining visitors to the Judith Basin area for 23 years. That’s a lot of haybale decorating!

The Montana Bale Trail is the route between Hobson, Utica and Windham. It’s about 21 miles long, all paved, and it bypasses some idyllic looking farms and ranches. It is held the Sunday after Labor Day each year.

The event began as a spoof between two area ranchers. One rancher put up a decorated haybale poking fun at the other one, there was a rebuttal haybale decorated by the other rancher and…the rest is history!

This year we started the route at the Hobson end. As we entered Hobson we each received a ballot to vote for “People’s Choice” and we could select three bale entries as our favorites. Hard working volunteers were greeting carloads of attendees and handing out information about the event.

Hobson had a nice display at the library and that’s where I took this photo of B-hay-be (Babe) the pink pig. B-hay-be looked like he was talking to three sheep in his barnyard – very clever display. Each year I promise to take notes so I can come up with something clever for a haybale entry. 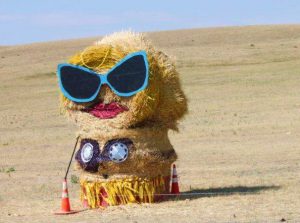 There were some outdoor sales going on in Hobson and several groups were serving food and beverages. We were eager to start traveling the route so we took a few photos and began our Montana Bale Trail journey.

We kept stopping to take photos and I was absolutely amazed at the ideas people came up with.

The Mid-Way-Cafe (located about midway on this route, of course) had lots of cars and vendors, also a hay maze. I stopped at one of the vendor booths and my friends all did the hay maze.

Our next stop was in Utica at the Utica Day Fair. Lots of vendor tents lined a grassy area, a musician was performing and I could smell yummy food cooking. One of our group tested nachos and rated them superb! I saw some great looking pie wedges pass by.

Decorated haybales usually stay up for a week or so and I always encourage people who didn’t attend the event to drive out and see the bales. So, hop in the car and take a drive to rural America – Montana’s Judith Basin.