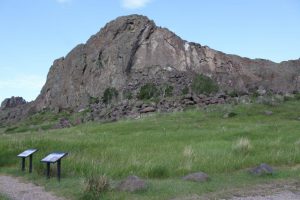 It’s a very small state park but incredibly significant to the Lewis & Clark expedition that viewed it over 200 years ago. The expedition had finally portaged the series of waterfalls near present-day Great Falls. They had expected one waterfall, then encountered five. For those of us who like to travel with a schedule, well, you can only imagine what this did to Lewis & Clark’s plan.

In Meriwether Lewis’ journal, he wrote “This rock I called the Tower”. It was the beginning of transitional terrain after spending time crossing the Montana plains. The plains were akin to today’s grocery store – large quantities of animals provided meat and protein for the hard working members of the expedition.

On July 3,1805, Lewis wrote “The Indians have informed us that we should shortly leave buffaloe country after passing the fall; this I much regret for I know we leave the buffaloe that we shall sometimes be under the necessity of fasting occaisionally”. All spelling and word errors aside, Lewis knew that their food source was going to change. Little did he know that this point of transition was more than one mountain ridge – they would nearly starve to death. 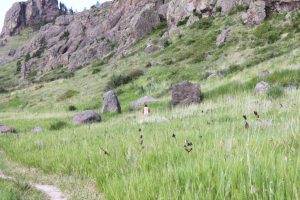 Some details about Tower Rock State Park – it is easily accessible off I-15 southwest of Great Falls. Watch for the Hardy exit which will also take you to many fishing access sites and a beautiful scenic drive in this rocky canyon area.

The park is one mile long (which makes it difficult to capture it in photos) and one-third mile wide. If you measured around the rocky park it would be 10,400 feet. At the base of Tower Rock you are standing at 3,552 feet above sea level. Total park size is 140 acres. There is a hiking trail that is a quarter of a mile long which is open sunrise to sundown.

Next time you are driving on I-15, take a short break for an upclose view of Tower Rock.