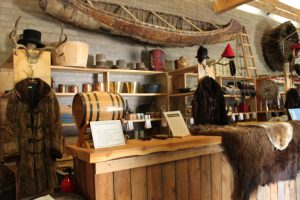 I was in Fort Benton a week ago and decided to take a guided tour of the Old Fort. I’ve toured the Fort several times but, as our guide noted, it is a work in progress, and they expand their collections and displays as finances allow.

To see this reconstructed fort is the best way for me to learn history. My favorite room is the trading post which is stocked with trade goods that look as they would have in the fur-trade era.

A massive stone fireplace is in one corner of the trade store (temps were hovering in the 90s the day I was there so the crew did not have a fire a-roaring!).

Furs, pelts and hides are prominent in the trade store – buffalo hides were the premium of the day during the peak of the fur trade era. I tried to lift one and believe me, they are heavy! 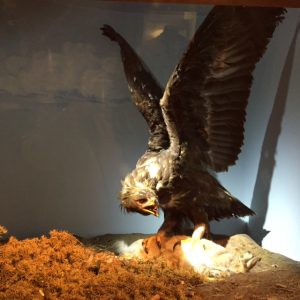 A glass-enclosed display shows and explains items found during an archaeological dig that was done to determine exact location of the structure’s perimeter.

Blackfeet Indians hunted and traded at the Old Fort and there are beautiful displays of artifacts including Native American clothing, headdresses, beadwork and weapons.

I was wandering along, absorbing all that I could and totally engrossed in some beadwork when I looked up and saw this big bird looking like he’d like to take a bite out of my scalp. OK – he had spent some time at a taxidermist but the resulting mount was very real-looking!

Several tipis are erected inside the fort and our guide pointed out that they would not have been there during real-time operation of the fort. He noted that they added a nice dimension and could show visitors how the nomadic Blackfeet tribe lived.

Another favorite building in the fort is the Starr Gallery of Western Art. There was a new exhibit there and I could have spent all of my time just looking at the bronzes and artwork. Very impressive. 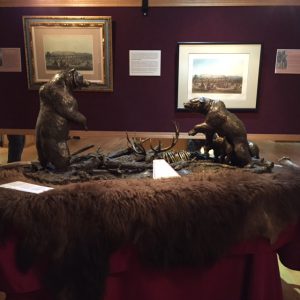 The Old Fort is open for tours from the later part of May through the end of September.

Fort Benton has several other museums – the State of Montana Agriculture Museum, The Museum of the Upper Missouri adjacent to the Fort, and the BLM’s Upper Missouri Breaks Interpretive Center. One ticket allows admission to all museums. Plan enough time to visit them all. You won’t be disappointed.