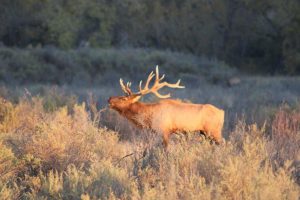 Today is the end of the season and as of yesterday,3,900 hunters (both successful and not-so-successful) had stopped at the game check station in Augusta. There have probably been more hunters checking in today so odds are that total will hit 4,000. That’s an increase of over 5 percent.

So, how many elk were harvested? At the Augusta game check station 445 elk had been checked since the season opened October 24. That’s 30 percent above the 10 year average.

Changes were made to the hunting regs and hunters could take more cows this season which probably contributed to the increase in elk harvested.

Montana Fish, Wildlife & Park officials were estimating that the number of white-tailed deer harvested would reach the 10 year average by close of the season today. The mule deer harvest (all bucks) was down.

Some hunting districts will have “shoulder seasons” this year although none are on the Rocky Mountain Front. These seasons were approved in an effort to reduce overpopulations on private lands in the districts. All of these seasons will be closed by February 15, 2016.