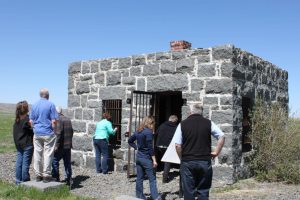 I wouldn’t say the Square Butte jail is going to lock anyone up these days but you can tell it was built to last!

On a group tour of the area I was able to “stand behind the bars” of this iconic structure.

Way back, think about 1913, the Milwaukee Land Company (yes, the same as the railroad), laid out the streets of the little town of Square Butte. The town was located on the route of the Chicago, Milwaukee, St. Paul and Pacific railroad’s route between Lewistown and Great Falls.

When you think back to what railroads needed to run in 1913 – mineral-free water and coal – Square Butte was a pretty strategic location.

Fast forward a couple of years to 1915 and residents of the town felt they were getting too many tramps because of the railroad. County commissioners worked their way through that issue by building the Square Butte jail. 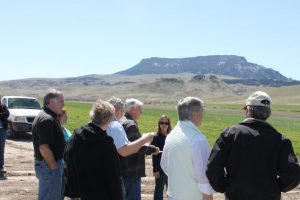 When you glance around the unique geology in the area it doesn’t take long to see where the building materials for the jail came from. Those pretty granite blocks were quarried nearby.

Did the Square Butte jail serve its purpose? There isn’t any evidence that the jail actually housed prisoners.

The structure was unheated so it would have been a bit chilly in the winter. It did serve as road crew housing later on, also as a bachelor’s residence and a granary.

The town of Square Butte is small these days but you’d be remiss in not stopping at the Square Butte Country Club for a cold one or a meal. I’ve had the best burgers and salads there – believe me, it is worth a trip!

And, when you polish off that burger and ale, drive over to the old jail and capture the moment with your Kodak!