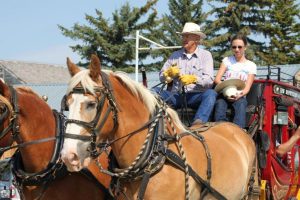 I pointed my wheels north this past Saturday for Dupuyer’s annual Grizzly Day. I’ve been to the event once before and had a great time. Ditto for this last Saturday.

The parade was scheduled to start at 11am. Parade watchers lined both sides of the main street of Dupuyer which is US Hwy 89.

A few vehicles traveling the highway slowed down and looked to see what was going on. Some stopped, some continued driving. Those who stopped weren’t disappointed!

A jeep carrying veterans was first, followed by the Grand Marshall in a horse drawn carriage.

There were plenty of horses in this parade and a nice variety too.

The owners of the Belgian draft horses pulling a bright red stage told me a tidbit about Percheron horses. I had asked what kind of draft horses were pulling the stage and said I thought maybe they were Percherons but they weren’t (first of all, wrong color). I was told that if a Percheron is born black, it turns gray as it ages. If it is born gray, it turns black. And, the only colors of that type of horse are black and gray. 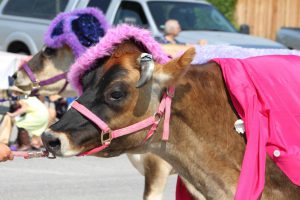 Well, I liked the colors of the Belgians and I also liked the paint horses with single riders on them.

All of the horses seemed calm – no parade jitters in this group!

A favorite entry came along midway through the parade.

Two cows were adorned with lovely hats, and dresses were spread over their backs. Each cow had a matching halter. They seemed like they were just out for a walk and happily went down the highway, turned around with the rest of the parade and walked back.

Vintage autos, the Corvette Patrol cars driven by Shriners, beautifully refurbished tractors (and one not refurbished), fire trucks, and loads of candy all combined to make an awesome parade for Dupuyer’s Grizzly Day.

Dupuyer is a pretty small town – there is one bed and breakfast there and the Dupuyer Cache (like a small general store). I stopped in to the Cache and a tourist was asking about the “Fresh eggs” sign. He wondered just how fresh they were – well, the answer was that they were gathered that morning. That’s fresh!

Another favorite store in Dupuyer is located inside the Cache and it is called Beaverslide Dry Goods. They sell wool yarn (cleaned, spun and dyed) by the skein, and also knitted and crocheted garments. The wool is grown locally on Merino sheep. Merino wool is known for having long fibers so it doesn’t pill like some wool. It’s beautiful and the displays are done well.

The town also has some new construction going on with the development of a saloon, eatery and small 8 unit motel.

What a fun day in Dupuyer. Our charming small towns are awesome!