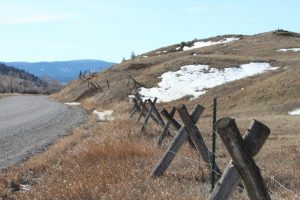 To be honest, I had been having a “not so great” day last week. Things did get better though – here’s my story.

I had a few things to get done in the office in the morning but I was eager for a road trip. I drove east on US Hwy 87 as far as the small town of Windham, then turned south and headed to Utica. My goal – drive south of Utica on the South Fork Road and then turn in to the Judith Guard Station. I have summer photos of that old building but I wanted a winter photo in that beautiful setting.

The South Fork Road was dusty and the only snow was in the ditches. I took a few photos along the way, drove through Sapphire Village and, when I got to the forest service road going to the Guard Station, I started getting excited.

After a minute or two that excitement turned into concern. I had been on a dusty road but now I was on a snowy road, real snowy. And I was climbing higher and the road was getting narrower. With each turn of my wheels the snow was deeper. I have a Ford Edge and I soon realized I had underestimated how quickly the snow levels could change. I needed to get off that road!

My options were either backing down the forest service road or turning around. I tried backing up but went too far to my left and I was looking over the edge of the mountain. Forward I went, then backed up and turned the other direction – snow bank, deep snow bank. It took three tries to get out of the snow bank and I realized I would have to turn around. Ten times forward, ten times backward and I was finally pointing back down the mountain road that I had just made a mess of. I slowly worked my way down to the South Fork Road and got out of my car to allow some “calm” to take over. 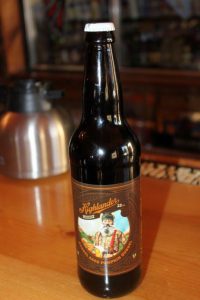 I drove back to Utica and then to Hobson where I stopped at Tall Boys Tavern for a late lunch.

It was about 2pm, the lunch crowd was long gone so I decided to take a seat at the bar on the tavern side of the restaurant. While my fish tacos were being made I started visiting with some folks at the bar. We talked about all of the tap handles that featured many of the state’s craft brews and one gal told me the story of a local connection.

Highlander Beer has a “Highlander Legend” series of beer and a fellow who lives near Hobson was featured on one of their labels. She also said he has a favorite stool at the bar and I was sitting in it. And, she said he is usually at the tavern about this time of day.

Well, I looked at the label on the Highlander beer bottle and he didn’t look like a guy who would be out and about every day. I would guess him to be more of a “reclusive mountain man” kind of guy. 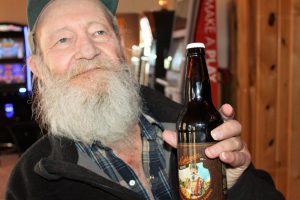 I was just about finished with my fish tacos and – you guessed it – that legend walked through the tavern door and sat down at the bar.

I wasn’t sure if I should offer him my barstool, maybe it really was HIS barstool! He seemed content where he was so I asked if I could take his photo. He said sure, why not.

He was drinking a Highlander beer so I asked him to hold it up for the photo. I may have been pushing my luck there but he did it. I think he is pretty happy for the attention that comes with his “legend” title.

The text on the Highlander beer bottle talked about this legend and here is what it said:

“Where streams of the Rocky Mountains spill out onto the prairie, an old man lives, rather ornery and hairy. This legend tends a small bison herd, makes his own bologna, collects taxidermy and vintage autos. Some say he has a pet porcupine.”

The artistic rendition of the legend on the beer label was good. It looked a lot like him, perhaps dressed up a bit.

My day was definitely looking up and I can now say I have met a legend!