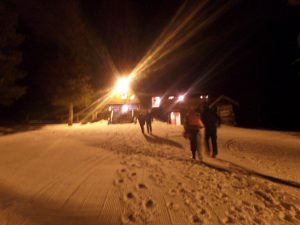 Last Friday I pointed my wheels toward Choteau, Montana. I love to attend some of Central Montana’s unique events and this one sounded amazing. Supper on the Slopes was calling my name!

Teton Pass Ski Resort is located about 25 miles west of Choteau. My friend and I drove to Choteau, parked my car in the parking lot behind Main Street Express and took the free shuttle to Teton Pass. There were eight of us on the shuttle.

I whined a bit that it was almost dark at 5:30 because the scenery as you head in to the Rocky Mountain Front is truly spectacular, especially with a little snow.

With recent snow, and a bit of ice, our driver took the road carefully and it took us about 40 minutes to get to the ski area. It was a relaxing drive though and we made new friends as we traveled along in the cozy shuttle.

As we turned south off the Teton Road I saw the lights of the ski lodge. In Choteau most of the snow had melted but we were now in some pretty deep white stuff. Elevation at Teton Pass Ski Resort lodge is 6,190 feet and at the summit it is 8,600 feet so it’s no wonder there was a lot of snow. 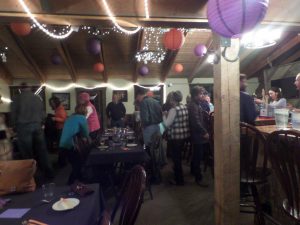 There was a snowmobile with a driver waiting for the shuttle in case anyone needed a ride up to the lodge. We walked and it felt good to stretch. It isn’t far, just a bit steep.

I was absolutely amazed when we entered the ski lodge! It was decorated beautifully with a warm and cozy feel. We were greeted by staff and then headed up to the dining area.

Our menu for the evening was based on Thai cuisine and what a treat it was!

The first course was caramelized onion naan and Thai carrot ginger soup. OK…I could have been satisfied with a large bowl of that soup and a couple more pieces of naan. Oh my, both were just perfect.

But, there was more to come! 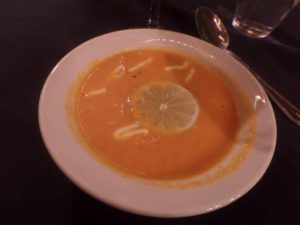 When we purchased tickets for Supper on the Slopes ($35 and that included an alcohol beverage) we had two options for our entree – Thai grilled shrimp pasta with sesame peanut sauce or chicken curry over coconut rice. My friend chose the shrimp so I decided to try the chicken and we could share samples. Both entrees were beyond excellent.

I was almost full but had a little bit of room for dessert, of course!

Coffee cardamom ice cream with shortbread was my dessert choice although the coconut tapioca pudding with cayenne spiced mango sounded tempting too.

We met incredibly interesting people at our table. Two Brazilian ranch interns kept the conversation lively, a bed and breakfast owner and ranch couple also chimed in. One other couple had been on the slopes all day and had stayed for supper.

I’m not sure how many people were at Supper on the Slopes but I would estimate about 55. Capacity for seating was probably about 70. 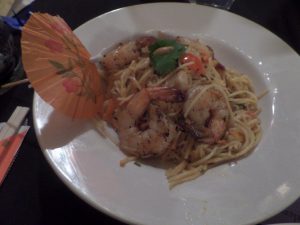 I was so impressed with the food, the shuttle ride, the decorations, the comfy lodge – I guess I was impressed with it all! And, I thought is was reasonably priced.

Teton Pass Ski Resort plans to do another Supper on the Slopes on Valentine’s Day.

I’ll be figuring out how to schedule another trip for Supper on the Slopes.