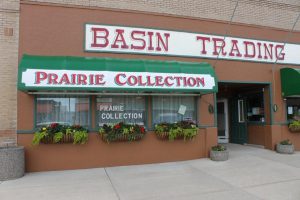 I was on the highway from Lewistown to Great Falls and decided to make a quick (I thought) stop mid way in Stanford.

Stanford is a town of about 400 people and you need to turn off the highway to see the community. And, it’s well worth the stop!

One of my reasons for stopping was to grab a good cup of coffee. I drove on Main Street to the Basin Trading Post, Stanford’s equivalent of a mini mall. The trading post has a great gift shop called the Prairie Collection with many Montana made items for sale. It also has a restaurant with a coffee bar, hardware store, clinic and a guitar maker.

When you drive in to Stanford in the summer you can’t help but notice all the flowers in front of businesses. It’s an organized beautification effort with each business using the same types of flowers and it really makes an impression on visitors. Recent rains and cool weather had slowed the growing a bit but things were still looking good. I took several photos to show just how a business can appear so welcoming with the addition of some landscaping.

My first request was to get my coffee! The restaurant serves all types of blended coffee beverages but I just wanted some fresh roasted, fresh ground java. They were serving Montana Coffee Traders coffee and it hit the spot!

There are new owners at the deli and I hadn’t met them. Typical of a town like Stanford, I not only met them, but had a nice visit with them while I was getting my coffee!

They’ve named their new venture the Galloping Goose Deli after a series of seven railcars that were called that. These railcars were built in the 1930’s and the line operated until the early 1950’s. The rail line ran right through the town of Stanford.

Restaurants in any town are a true labor of love – long hours and hard work are probably the keys to success. The owners talked about how early they get up to have baking done in time for that first customer.

The centerpiece of the Basin Trading Post is a glass display case with a large white wolf displayed in it. This wolf terrorized and destroyed ranchers’ livestock for many years and when it met its end, it was sent to a taxidermist. 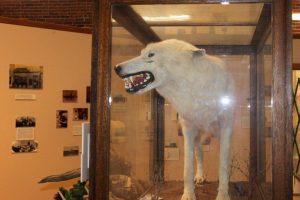 Surrounding the wolf display are copies of photos that detail the area’s history. Stanford does have a museum that I have visited and they also have a lot of historical displays but the trading post display is a great lure for the casual visitor that may not be tempted to go to the museum.

Charlie Russell lived and worked in this area when he first came to Montana. Many of his paintings depict the area’s geographic landmarks and it’s fun to travel along and see them still looking the same as when he painted them. He also did a painting in 1900 titled Lone Wolf and you can see it at the Russell Museum in Great Falls.

My stop in Stanford was well worth the time – I did get a good cup of coffee but I also had a great lesson in the area’s history.