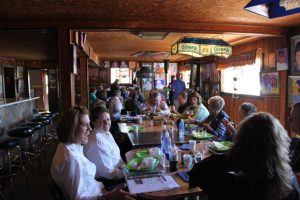 There were 25 of us who gathered in Square Butte, MT yesterday which may have doubled the town’s population!

I always say Square Butte, MT because there are two geological formations called square buttes that we frequently talk about in Russell Country. One is west of Great Falls between Ulm and Cascade and the other is east of Great Falls between Geyser and Stanford where we were yesterday. And, both buttes can be seen in Charlie Russell paintings and both are equally beautiful.

The community gathering spot in this little town is the Square Butte Country Club. Known for having the town’s only parking meter (and yes, I got to park there!), it is also known for having absolutely phenomenal food. And, toss in some pretty unique art that almost covers the walls, very friendly staff (and patrons) and you have a pretty perfect setup. Much of the artwork is caricatures and portraits of the locals – what a way to experience rural Montana! 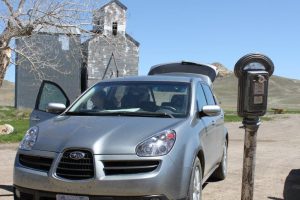 We left Great Falls, drove east on US 87 about six miles, then took the Highwood turn. I wanted to see some truly “off the beaten path” scenery so we took the Shonkin road after we drove through the small town of Highwood. The Shonkin road is gravel but, even with lots of recent moisture, it was in pretty good shape.

We were a bit late getting to this meeting because we took such a scenic route.  There was one visible parking spot left for me when we drove up to the Square Butte Country Club – right by the famous parking meter! Yup, I took the parking spot but I didn’t plug the meter!

The photo below shows some of the unique artwork inside the country club. There were lots of camera flashes, enough to make one of the local lunch “regulars” say, hey, who are these people?? I explained we were out experiencing some small town charm and a slice of rural Montana. 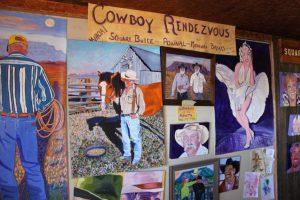 When I mentioned above that much of the artwork features locals, I should state that Marilyn Monroe was NOT a local! Someone’s idol I suppose, enough to rate a painting at the Square Butte Country Club!

And I did notice a few of our group doing photos alongside the painting of her.