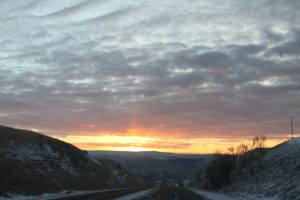 We wanted to get some photos and video of snowmobiling in the region and I started asking around for some contacts. I mentally went through a list of friends and turned up nobody who had a snowmobile. Actually, I needed several snowmobiles to photograph and one for me to ride on. Okay, now remember that comment about me “riding on” a snowmobile.

I was lucky to find a guy who is the president of the Montana Snowmobile Association and believe me, he had contacts!

One day my phone rang and the guy said “I’m supposed to call you about snowmobiling”. I explained what we wanted to do and when we could go and he said he’d get back to me.

Another phone call and the guy said he had lined up several snowmobilers and some type of pull-behind vehicle for our videographer. He said he’d have a sled for me too. Awesome – everything was coming together. 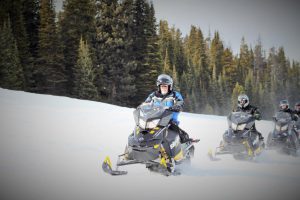 I was up early to make the drive south on US Hwy 89, past Neihart and then into the Kings Hill Winter Recreation Area. I did make a few stops to grab some sunrise photos a few times.

Four snowmobilers were waiting at the winter recreation area and one of them had a cart-like thing hooked on to a snowmobile. Our videographer checked it out and said it would work well for him.

My snowmobile contact walked me over to a snowmobile and said, “here’s your ride”. It obviously was for one person which meant yours truly was not just “riding” I was “driving” the snowmobile. Oh dear. The last time I drove a snowmobile I got so stuck that several people had to help get the sled out. On that excursion I believe I said that was the end of my snowmobiling career!

Well, after a few pointers, plenty of “you’ll do fine” comments and off we went – very slowly for me but I was managing to keep up with the group. 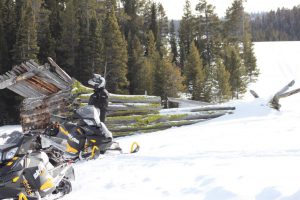 It didn’t take me long to relax and start enjoying the views. Majestic mountains, plenty of snow, an old moss-covered cabin, a perimeter of snow-covered trees and not one more snowmobiler to be found. We had the entire area to ourselves!

And, the area is a snowmobiler’s dream – there are 325 miles of groomed trails.

The Kings Hill Winter Recreation Area is about 65 miles southeast of Great Falls. Nearby towns include Neihart and Monarch right on US Hwy 89 and White Sulphur Springs, about 35 miles south of the recreation area.

The day went well, we were snowmobiling with the pros and all of us had a fun time. I’m actually glad I was able to drive my own sled now. It was a great experience!