I was on my way to Chinook in northern Montana last weekend and had a little spare time so I decided to turn in to the little town of Box Elder and drive through Rocky Boy.

When you are traveling on US Hwy 87 the terrain seems relatively flat. Area farmers grow plenty of small grain crops ranging from wheat and barley to a nice variety of pulse crops (peas, lentils). A lesson about agriculture – if you pull up the root of a pulse crop you’ll see small nodules on it and that’s where nitrogen falls down from the plant and puts it back in to the soil. Moisture is always welcome and it has been raining this week so let’s hope everyone has all of their seeding done.

Back to my drive – after I drove through Box Elder I could see the Bear Paw Mountains in the distance. Since I was raised near the Bear Paws I pronounce it the way it is typed here. Some folks say Bear’s Paw and I tend to think they are absolutely wrong!

Small clusters of homes, typical on our reservations, signify the close-knit families of Native Americans. A paved non-motorized path paralleled the highway I was traveling on when I turned in to the reservation. 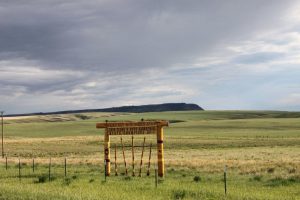 Rocky Boy is home to the Chippewa Cree tribe, actually two tribes that combined when Chief Rocky Boy (Chippewa) and Chief Little Bear (Cree) were seeking land for their people. Rocky Boy Indian Reservation was created in 1916 by an act of Congress – different from other reservations that were created by treaties.

Rocky Boy is the smallest reservation in Montana and the Chippewa Cree tribe is also the smallest tribe. Originally, the reservation boundaries would have included what is known today as Beaver Creek Park but that land was removed from the Congressional act leaving the tribe with about 56,000 acres.

The land on Rocky Boy was looking absolutely beautiful when I was there last weekend. Recent moisture (although we always can use more) had turned the short grass green and spring seemed to be popping up everywhere.

The competetive spirit of our Native Americans was evident as I saw the sign touting recent sports championships. I had just read that three graduating seniors from Rocky Boy were recently recruited to play college basketball for the University of Great Falls. 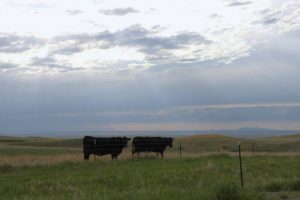 Ranching is evident on this grazing land although there isn’t a lot of tillable land for farming.

Everywhere I looked on my short drive I wanted to take a photo. The Bear Paw Mountains captured my attention to the south, the Sweetgrass Hills northwest of Rocky Boy looked like an artist had painted them.

We have several “square buttes” in Central Montana and this feature on Rocky Boy can be easily seen from US Hwy 87. It is long and looks flat-topped, not as square as some of our other buttes. Other notable mountains on Rocky Boy are Baldy Butte and Centennial Mountain.