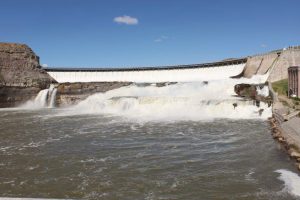 This morning I looked at my schedule, then at the weather forecast, and I became a bit grumpy. The morning weather looked good but in the afternoon we were supposed to see clouds rolling in, some wind and a chance of thunderstorms. I had two meetings that would break up my morning with not enough time to drive out to Ryan Dam to do photos.

Fortunately, my grumpiness didn’t last long because one meeting was cancelled! I quickly returned a couple of phone calls, grabbed my camera and out the door I went.

The drive to Ryan Dam is relatively short – about four miles north of Great Falls on US Hwy 87 (what locals call “the Havre highway”) then turn right and drive for nine miles. There are large brown signs marking the turns on this paved road so the dam and falls really are easy to find. As you drive east on the Ryan Dam road you see lots of grain fields and just the tops of the river bluffs. Until you begin the descent to the river you don’t realize how deep those bluffs are. 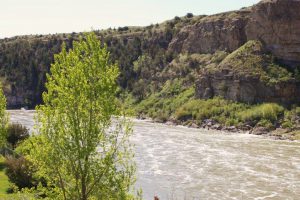 The hydroelectric power dam known as Ryan Dam sits atop The Great Falls of the Missouri River. These falls were first described in writing by Capt. Meriwether Lewis on June 13, 1805. With his creative spelling, he described them as “a sublimely grand spectile, a roaring too tremendious to be mistaken for any cause short of the great falls of the Missouri”. Well, they are still a pretty amazing spectacle and today they were roaring, big-time!

During their winter stay at Fort Mandan, members of the Lewis & Clark expedition had been told about this roaring waterfall. They expected one waterfall and found five. That would surely create a mess of anyone’s travel plans particularly when you are traveling upriver and need to portage the waterfalls over cactus-laden prairie. 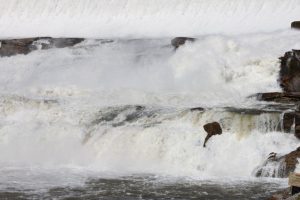 On June 19, 1805 Capt. William Clark had the task of measuring the depth of the great falls. With a sextant and a rod he used geometry (ugh!) and determined they were 97’ ¾”. Recent electronic measurement recorded the height at 96’ so Clark was pretty accurate with his crude measuring equipment. The drop at Ryan Dam today is actually 150’ from the reservoir behind the dam to the river. The water goes through huge turbines to create electricity and then is returned to the river from the bottom of the powerhouse.

A perfect situation for a waterfall – three things are needed. First you need plenty of water, at least seasonally. Then you need a river or stream cutting down through the landscape. Finally – the rock layers need to be right. You need a layer that resists erosion more than the rocks above or below it. At the great falls, hard sandstones are layered with softer mudstones. As the river cuts its gorge it gets hung up on the hard resistant sandstone layers and forms falls. Oh…lots of technical stuff! 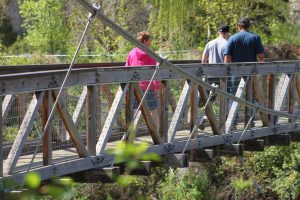 At Ryan Dam (built from 1913 – 1915) there is a clubhouse used for events/receptions and a picnic island open from Mother’s Day through Labor Day. You walk across a suspension bridge to get to the island and find a manicured lawn, picnic shelter and a small building with electric stoves, a “new way of cooking” when this was built!

Before you cross the suspension bridge there is an old set of stone steps probably built when the dam was constructed. They were a beautiful example of stonework. 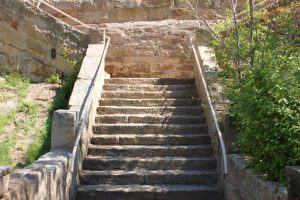 On the picnic island I visited with a family from Helena who was spending the day in the Great Falls area. It’s rewarding to see people enjoying the same landscapes and visitor attractions that I like. I hope they had a fun day. My morning trek to the great falls was just what I needed.