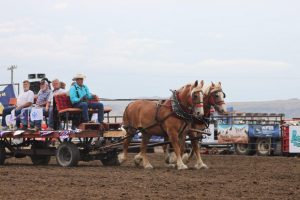 After a 30-year plus absence, rodeo returned to Cascade, Montana this weekend.

A hard-working group created an arena – they plowed a pasture, put up a fence, placed bleachers…this was an effort that started literally with a blank canvas and produced fine results.

This was my four year old granddaughter’s first rodeo and she was rather cautious and curious about all of the cowpies we saw as we walked from the parking pasture. Yes, three weeks ago this was a cow pasture.

We arrived early for the 7pm performance Friday night. I noticed on the schedule that the main rodeo was to begin at 7 but there was mini bull riding and also mutton bustin’ for kids at 6pm. I wanted to see both of those events!

There were only four kids who did mutton bustin’ and I must admit that the rides aren’t very lengthy. They sure had the crowd roaring though!

After the mutton bustin’ was over my granddaughter said she would never want to ride a lamb. Well, these were pretty aged lambs, more in the mutton category but I don’t blame her for not wanting to do this. The sheep and kids may be closer to the ground than riders on horses but it’s still a wild ride with a hard landing. 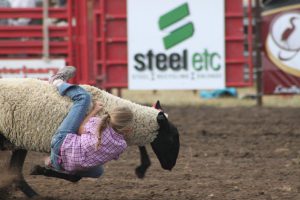 The Montana Pro Rodeo Fall Finale got underway promptly with the Star Spangled Banner sung by an 8th grade girl from Hobson. A team of draft horses came through the rodeo arena carrying a few of those who had worked to create this event. The rodeo was off and running.

A gal that I went to high school with had a son entered in the steer wrestling event. I took several photos of her son and as I looked at them later it looked like “four easy steps to steer wrestling”. Well, this event isn’t easy and you’d want to be fairly strong to wrestle some of those big steers.

This calf roping photo is a good example of how athletic rodeo riders need to be.

First of all, just getting on the horse – yes, I’ve used a step stool or bucket to accomplish this task at times!

But, jumping off the horse after the calf is roped and running to get the calf before he takes off…well, you’d get your heart rate thumping. 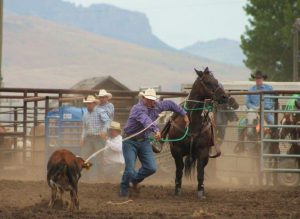 Rodeo organizers also had a mini ferris wheel for kids, two bouncy houses, a toy booth where you selected a duck to determine your toy prize, sunglasses for sale – quite a few activities for kids.

Did I mention food? As we sat in the bleachers I could sense the wonderful aroma of pork on the barbecue. From the smiles on many people who came by eating BBQ pork I’d say it was a success.

There were also beverage vendors and other food vendors.

Kudos to the community of Cascade (a whopping 700 people). They not only hosted a successful event after it had been absent for over three decades but they now have a rodeo grounds for future use.

The setting three miles out of Cascade is beautiful. The Big Belt Mountains are in the background amid prime ranching country. 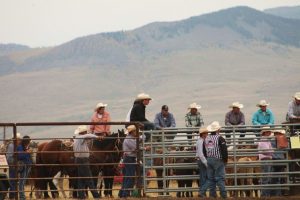 As we drove back after the rodeo, we saw that the streets in Cascade’s downtown area were blocked off for the street dance. We didn’t stay for this – after all, a four old (and her grandma) need their sleep. I suspect it was a good time though.

My granddaughter talked nonstop about the rodeo on the 20 minute drive back to Great Falls. Lots of questions, lots of unforgettable time spent together!