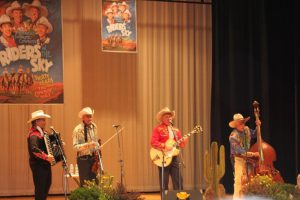 A Nashville, TN group, Riders In The Sky, headlined the evening performance at the Montana Cowboy Poetry Gathering Saturday night in Lewistown.

There are four musicians in the group and their instruments include guitar, bass, violin (fiddle) and accordion. This group has been around for over thirty years and they say they are “keepers of the flame” of unforgettable cowboy and western music.

This group also manages to work in some good humor along with their music. At the beginning of their set they announced how many concerts they had performed – it was over 6,000. They play off each other’s humor, the logistics were flawless – maybe that happens with practice and over 6,000 performances!

I loved the old-time cowboy songs they sang. But, here’s some trivia I learned. Riders In The Sky has won two Grammy awards recently.

The first Grammy award was for “Woody’s Roundup” that was in the Toy Story 2 movie. And, this grandma has watched one of the Toy Story movies so I was familiar with the characters in the song! I have to admit, the violin player reminded me of the lanky Woody character in Toy Story. 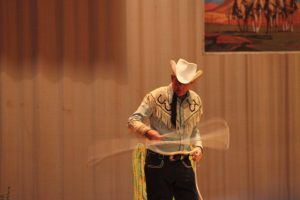 The other Grammy award Riders In The Sky received was for Monsters, Inc – Scream Factory Favorites, a companion CD to Pixar’s movie of the same name. So, here are some old-time cowboys appealing to kids’ movies. Pretty amazing.

Did I mention the rope tricks? Well, the fiddle player had his skills challenged as he twirled his loop and attempted to jump through it. He missed several times (and that may have been intentional!) but finally got the low lying loop twirling and hopped inside of it.

As this group bantered with the crowd they commented that they had performed at the Fergus County fair 22 years ago. They joked about why it took so long for them to get invited back!

Tickets for the evening performance of the Montana Cowboy Poetry Gathering were very reasonable – $17.50 general admission tickets included 10 poets and musicians that opened the show and also the Riders In The Sky performance. There was also reserved seating but my general admission seat in the Fergus Center for the Performing Arts was great. 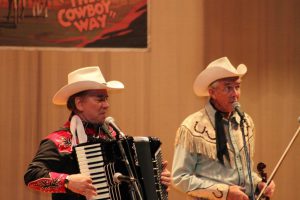 The performing arts center is the auditorium in the high school and it is designed well for this size concert. The only downside is it isn’t air conditioned and, with a sell-out crowd and temps above 90 that day, it was warm. Nobody seemed to mind the heat though – they came to hear some good tunes and this group delivered!

The Montana Cowboy Poetry Gathering is an annual event in Lewistown and is held the second weekend in August. If you missed it this year, mark your calendar for next year’s gathering.