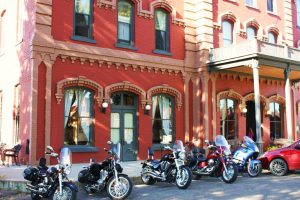 We were touring around Fort Benton recently and spent the night at the Grand Union Hotel.

The hotel sits at one end of the historic river levee so it’s a great anchor to the downtown area. A beautiful building, 26 elegantly restored rooms and an awesome restaurant make up the Grand Union.

The Grand Union was built in 1882. Steamboats were still coming up the Missouri River and Fort Benton was their final destination before turning around and heading back downstream. Transportation modes were about to change and that would have a serious impact on Fort Benton and this newly constructed hotel.

The hotel gradually fell in to disrepair, underwent several ownership changes, sat empty – the bane of many old buildings.

Finally, about 15 years ago, new owners bought the property and began restoration. A tedious processs, but, all of that hard work and attention to detail have resulted in a top-notch historic hotel. 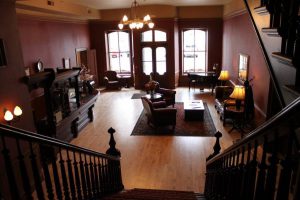 As we drove up to the hotel parking area I noticed five very high-end motorcycles parked in front. What a photo! The hotel was at capacity, thank goodness we had reservations!

It’s difficult to describe how relaxing the hotel is – from sitting in the luxurious leather chairs in the lobby to climbing the grand wooden staircase – a feeling of elegance and peacefulness prevails.

Our stay at the Grand Union was a much-needed respite from the day to day hustle and bustle – what a treat!