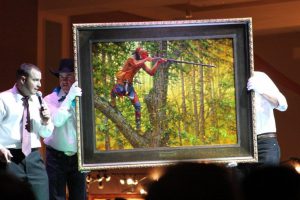 This past weekend saw a record-breaking bid for the Russell Museum’s annual event titled The Russell: An Exhibition and Sale to Benefit the C. M. Russell Museum. Long title, outstanding event!

This multi-day event was the catalyst for what has become Western Art Week in Great Falls, Montana. You could literally devote four days and evenings viewing a variety of art – variety in styles, media and price range.

Several hotels have art displayed in their lobbies and also in their rooms. Curious art shoppers (and lookers) can wander in and out of hotel rooms, visit with the artists and purchase art. The wandering part is free! 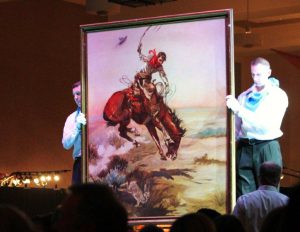 The biggest event of Western Art Week is Saturday evening’s auction organized by the Russell Museum. It appeared to be a sell-out and I was thankful to find a seat as I arrived early.

Let me be clear, bidding was not on my mind! This auction is in a league of its own attracting collectors of high-end art, dealers and buyers for art galleries.

Food and a variety of beverages were abundant. After a few welcomes and a quick review of bidding rules, the auctioneer stepped up and the energetic pace began!

The auction catalog had photos of each piece and price range estimates. I was trying to follow along in the catalog but bidding was fast and fun to watch so I just made random notes every now and then in the catalog. Several of Charlie Russell’s works were spread throughout the auction. 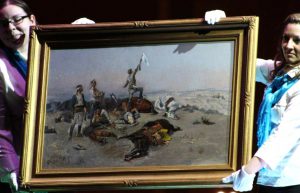 The highest bid for the evening was for a Russell oil (23 x 35 inches) painted in 1895 and titled “Offering A Truce (Bested)”. The painting’s theme – horse thieves and cattle rustlers. The winning bid was $1,250,000. Yup, more numbers in that price than what I’ll ever be bidding! It was so exciting to see the bid number climb and I’m sure those who were bidding had hearts beating faster than mine.

Exciting, fast paced, fun and interesting. I hope I can go again next year!