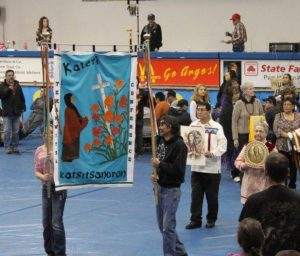 The University of Great Falls held a traditional powwow last weekend on campus. It was their 32nd annual powwow and it was free to attend.

I stopped by to watch two things – the Tiny Tot dancers and a ceremony commemorating the canonization of Sister Kateri Tekakawitha, the first Native American Catholic saint who was named in October 2012.

My timing was great as one of the drum groups had just begun for the ceremony for Sister Tekakawitha.

McLaughlin Center on the UGF campus is where the powwow was held. It is a gymnasium and the accoustics were really not meant for drum groups. Wow, talk about loud!

It was very impressive to see and hear information about the first Native American Catholic saint though. A round dance was done with a banner for St. Kateri Tekakawitha. 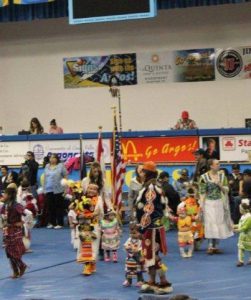 There were a lot of families getting kids ready for the Tiny Tot dance and that was truly a sight to see.

The kids’ dance outfits were absolutely beautiful. I couldn’t imagine how many hours of labor (and love) go in to making these outfits.

Some parents danced with the kids, other kids went on their own. A different drum group performed during this dance.

There were grand entries Friday night and twice on Saturday.

I always tell visitors who have never been to a powwow to try and watch the grand entry. You’ll see all types of dance outfits, specific to the type of dance the contestant plans to enter.

The UGF powwow also honors Sister Providencia each year. She was a frequent visitor to the Indian communities on the outskirts of Great Falls delivering food and organizing schools to teach the children. 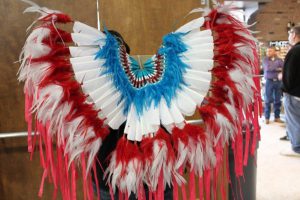 As I was leaving the powwow I saw a mother helping her young boy out of his dance outfit. This photo shows just a part of what he was wearing.

If you get the chance to attend a powwow in Central Montana make plans to go. You can learn a lot about the history of the dances done and it’s an impressive sight to see.