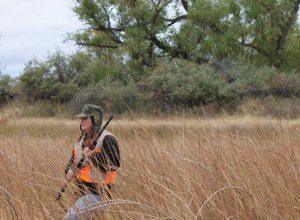 OK, I’m going to do some whining right off the bat here!

I had envisioned a crisp fall day, bright sunshine and basically a great day out of the office in search of some wily pheasants.

The first thing I did was look out the window and that “slight chance” of precipitation that the weatherman predicted had already come true. In Montana we know better than to complain about moisture so I decided I would try to put it out of my mind.

We had a good fall “chill” which to me means more than “crisp”. I figured things would get better after the rain clouds dispersed and the sun came out. Alas, it was not meant to be!

Raindrops every now and then. 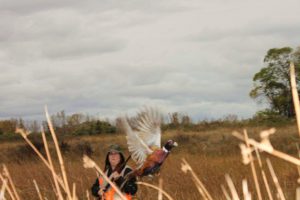 We had planned on pheasant hunting though and out we went. I wasn’t toting a shotgun but wanted to capture a good photo when we flushed a rooster.

The area we were hunting was on the north side of the Milk River out of Havre. We were with Northern Edge Hunts, local farmers who have worked hard on habitat restoration. That proves my favorite theory – if you have the habitat, birds will follow.

After studying the ground cover and wind direction I thought I was in the right place if a pheasant flushed. I wouldn’t be in the way and I’d get an awesome photo.

Funny thing, this bird had a different plan!

You have to think fast when the pheasant flushes – part of the reason I’m not the best shotgunner around.

Well, this bird is still flying around! We basically called him “pardoned”. 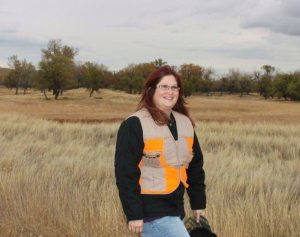 The pheasant population in Montana is spotty this year. The Havre area had a good hatch and seemingly a good survival rate. Some areas were hit harder with dry conditions so their populations aren’t as strong.

This afternoon I visited with some other local hunters and they had limited out on pheasants for the last two days – pretty happy hunters. Well, even my hunting buddy was happy, even though the only rooster we saw fly was…still flying.

Yes, even though it was chilly, it was a good day out of the office.