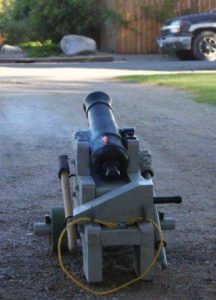 Actually, the Old Fort at Fort Benton opened with a “boom”!

The firing of the cannon has become a ritual for celebrations at the restored Old Fort Benton in this small historic town.

Dubbed the “Birthplace of Montana”, Fort Benton was the site of many steamboats who came up the Missouri River in the 1800s. This was the farthest they could come without getting in to the upstream series of waterfalls.

Fur traders, Native Americans and folks who came west looking for fortune all connected in Fort Benton so the moniker “Bloodiest Block in the West” also became quite fitting.

I was sitting inside the fort perimeter with lots of history lovers.

The celebration was a kick off to Fort Benton’s museums and heritage complex opening for the summer. 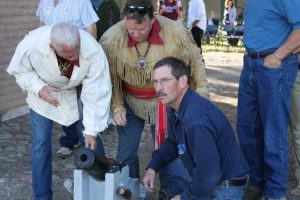 Included in the complex are the State of Montana’s Agricultural Museum (also with archives,  library and re-creation of an old town outside), the museum on the levee adjacent to the fort with focus of the fur trade era, the Old Fort and BLM’s Upper Missouri River Breaks Interpretive Center.

Visitors can purchase one admission ticket that is good for all of the museums and the Old Fort.

Costumed interpreters give guided tours of the Old Fort during summer months and visitors can check out the other museums on their own schedule.

The restored Old Fort has become so much more than just a fort – in addition to the trade store, you can see great historic displays and artifacts with emphasis on Native Americans and their traditional way of life, a blacksmith shop, living quarters for the head of the fort and, more recently, a beautiful art gallery named the Starr Gallery.

The Starr Gallery has Karl Bodmer prints displayed portraying early days on what we now call the Upper Missouri River. There is also a stunning exhibit of Bob Scriver’s “No More Buffalo” series of bronzes. 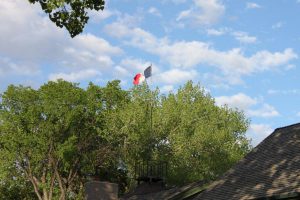 The celebration of the summer opening of Fort Benton’s visitor attractions also included a concert by Blackfeet troubadour Jack Gladstone. I could have listened twice as long but changing weather told us that it was time to help pack things up and head home.

The flag of the American Fur Company was still proudly waving over the fort as we drove away. The vast blue sky and lush trees in the park formed a perfect backdrop.