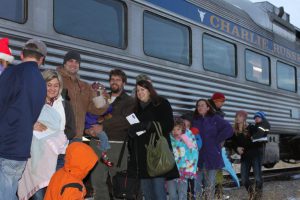 This past weekend I was fortunate to experience the North Pole Adventure near Lewistown, MT.

Five of us, including one three-year old, rode the Charlie Russell Chew Choo train which becomes the “North Pole Adventure” during December.

There are two North Pole train runs each Friday and Saturday during the first three weeks of December – a 5pm and a 7pm run. We rode the 5pm train Saturday.

Boarding begins a half hour prior to departure and we drove up to the Ware, MT boarding location just a few minutes before 4:30.

Spring moisture in this area caused some flooding and quite a bit of damage to one of the three trestles that the train crosses so the boarding site was relocated.

I was driving so I decided we would take a different route to get to the boarding site. We were coming from Great Falls so we turned north at Moccasin, MT onto a gravel road. I do believe I may have missed one turn – but – these roads all seem to connect so we got to Ware just fine. We did a few more miles than I had planned but we got there! 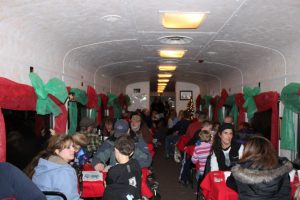 I’ve ridden the Charlie Russell Chew Choo before but the passenger cars were redecorated for the Christmas season. Red and green valances covered what is typically a western/cowboy motif. Bright red tablecloths covered the tables and it seemed like there were elves everywhere!

There are five passenger rail cars pulled by one engine. I think capacity is about 225 people and this train was full!

Passengers were encouraged to dress warm. The train is heated but metal rail cars aren’t that well insulated. We were plenty warm though.

Hot chocolate and cookies were served to everyone by some very busy elves. Christmas songbooks were on each table and each child was given crayons, some pages to color and another page to use for writing a letter to Santa Claus.

The three-year old in our group was too excited to color – the train ride, the possibility of seeing the North Pole and also Santa Claus, and all of the other young children around us seemed to be a distraction from coloring. 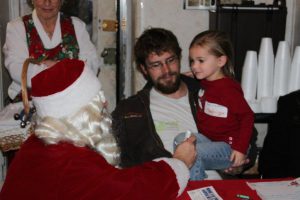 The elves led us in singing Christmas carols. Then, all of a sudden the train slowed down and we could see the glow of what we hoped was the North Pole. Sure enough, we were at the North Pole.

After the train came to a complete stop we could see Santa walking from his workshop towards the train. He was waving and our three-year old started waving back. There was a magical connection.

Santa boarded the train in a different passenger car and we (and many others) were eagerly waiting for him to get to our car.

Finally, he came through the door. Little eyes grew wide and smiles appeared on a lot of young faces. OK, on a lot of older faces too!

We had a great time on the North Pole Adventure – and made some wonderful  family memories.