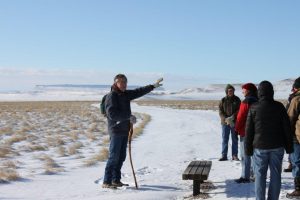 I set a goal New Year’s day – get some Christmas decos taken down and put away, and then I hoped to get out to First Peoples Buffalo Jump State Park in time for a “First Day” hike there.

A national association of state parks had designated New Year’s Day as a time to do a “First Day Hike”. This year was the first I had heard about it and several of our Montana state parks were offering guided hikes.

First Peoples Buffalo Jump State Park is about 15 minutes from Great Falls, Montana. You exit I-15 at Ulm, then take the paved Frontage Road about 3.5 miles.

The First Day hike was set to start at noon and I drove in to the parking lot about 3 minutes to 12. Cutting it a bit close, I didn’t have much time to get organized. Camera-check, neckscarf-check, water bottle-check but then I set it down for a minute-uncheck, kleenex-no check mark there. I wasn’t worried though because I didn’t plan on doing the entire hike, just part of it in an effort to stretch my legs and grab a few photos. 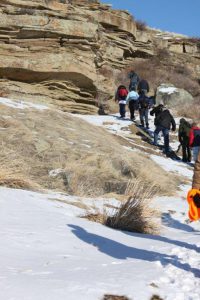 Well, I kept finding more great photo ops and ended up doing the entire hike. It was just 3.5 miles at an easy pace but it would have been better to be more prepared.

Park manager Richard Hopkins led the hike. Richard literally had encyclopedic-level knowledge of the park and the Native Americans who used the sandstone cliff formation to harvest their winter provisions.

At one point I did a head count and there were 25 of us hiking. Two gals turned back mid-way but we still had a good sized group. Several times during the hike Richard stopped and gave us more history about past uses of the area.

There are marked and interpreted trails going from the visitor center at First Peoples and up the buffalo jump face. The trails are graveled for about half of the way and are handicap accessible. The final leg of the hike is not handicap accessible.

From the visitor center it doesn’t look far at all to get right up to the jump. Several people commented that it was much farther than what it looked and the climb was greater than they had anticipated. 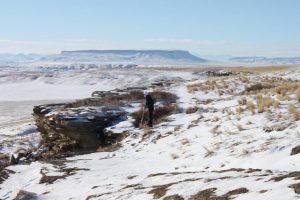 It is worth it though! I get to the park a lot in mild weather but this was my first winter hike there.

Most of the time I was at the back of the group stopping to take photos, then hurrying to catch up. I was so glad I took the time to go out to First Peoples, also took time to do the complete hike.

What a great idea for our state parks.