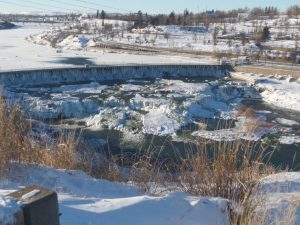 When the weather turns cold and the snow flies I tend to not want to get out and explore. I decided I just need to set aside a day every now and then, grab my camera and go!

Although I didn’t get too far from my home base, I did learn a little history on my New Year’s Day drive.

I stopped at the overlook for Black Eagle Falls on the south side of the Missouri River, across the road from Eagle Falls golf course. A few photos were quickly taken and the falls actually looked like they were frozen! I know my fingers were frozen by time I put my camera away. There was water going over the hyrdoelectric dam but some of it had frozen.

A large interpretive panel at the overlook gave history of the area. Black Eagle Falls are the uppermost falls in the series. Originally there were five falls but when the dams were constructed one became submerged.

In June 1805 Meriwether Lewis scouted the series of falls, probably thinking, oh crap, how will we ever get around these! When he was at the uppermost falls he saw an eagle nest in a cottonwood tree on an island in the river and noted that in his journal. That eagle nest became key when the area was named. 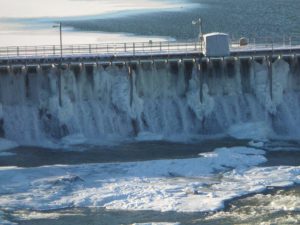 In 1891, eighty six years after the Lewis & Clark expedition portaged the falls, the Boston and Montana Mining Company built a smelter complex on the north side of the river overlooking the island that had the eagle nest. They processed copper at this site until 1918 and then the Anaconda Mining Company converted the smelter to a refinery for copper and zinc.

I vividly remember the 506 foot smokestack, visible from all directions when you were driving toward Great Falls. It no longer exists and the smelter is also gone.

I hope the original employees at the smelter and refinery were in awe of the views of the waterfalls as much as I was on New Year’s Day.