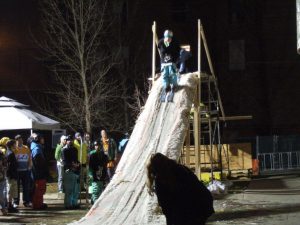 Friday’s Christmas Stroll in downtown Great Falls had all of the perfect elements – mild temperatures but you still needed winter clothing, lots of people, festive and decorated storefronts and most stores were open. There were street vendors selling a nice variety of food, restaurants and lounges were open and there was live music on the 400 block of Central Avenue.

The Polar Plunge brought out the area’s tough and fun-loving, all for a good cause.  Stroll buttons were for sale offering a chance to win prizes, the Great Falls Historic Trolley was decorated to the max and art galleries opened their doors as part of the First Friday Artwalk. Lots of things happening!

In the 200 block of Central Avenue I saw a pretty large crowd and then realized that a ski jump had been built, snow was brought in and area skiers and snowboarders were testing the jump. What fun to watch! 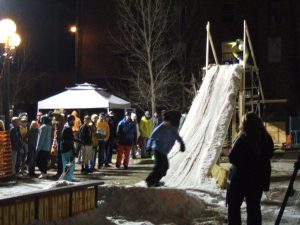 And, a great prelude to Showdown’s opening day set for December 9th.

It was fun to see so many families out.

The stroll is great exposure for downtown Great Falls with it’s many independent retailers and restaurants.