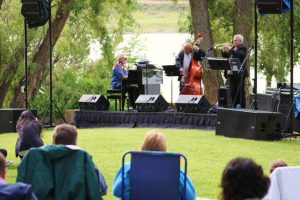 What a grand celebration idea for Montana Fish, Wildlife & Parks for their 75th anniversary.

Tonight they held a concert at Giant Springs State Park on the east edge of Great Falls.

I had seen the information in the newspaper and I really like to support different events like this. But, I was lucky to have overnight family guests all weekend and I had a ton of things I thought I needed to get done before the work week began. If I skipped the concert and stayed home I thought I may get more done.

Oh, to heck with checking things off my list!

I grabbed a lawn chair, a jacket and my camera and out to Giant Springs I went.

One of the compelling reasons I went was I want people to be successful when they have events like these. I wondered if many would show up.

Our weekend weather had been one cloudburst after another. Today was the best day of the weekend but we still had quick rainshowers several times. I’ve learned never to complain about rain in Montana. We are a state that has incredibly low humidity and not much rainfall. Our moisture comes during the winter months and melts in the spring so we aren’t very used to rain. 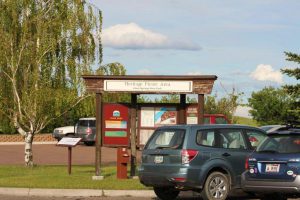 Giant Springs State Park is just a mile or so past Eagle Falls Golf Course and just beyond the Lewis & Clark Interpretive Center. As I approached Giant Springs I saw some flashing lights.

Fish, Wildlife & Parks had a truck parked with it’s lights flashing in an effort to slow traffic down. They were directing traffic to the the upper parking and picnic area so I assumed at least the lower (and closest) parking lot was filled. That was a good sign that some folks were supporting this. Well, it ended up being a lot more than some!

When I turned in to the upper parking area I didn’t know if there were even any spots left and that’s a huge place.

The attendant said to take a right, then another right, then look for parking. Jeez – I don’t think I’ve seen that many cars there in a long time! 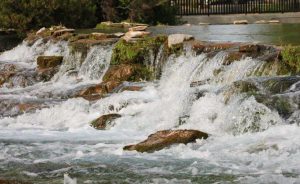 Good weather (finally), noted musicians (Chester, MT recording artist Philip Aaberg and his group the Montana Wildcats), no cost – they probably all contributed to the success of this event.

Artist Monte Dolack introduced the group and they began playing.

I looked around the crowd and I could see people fishing in the Missouri River, two people in a kayak, families visiting and kids playing. What a varied mix of people, and all seemed to be having a great time.

The gurgling of the giant spring combined with lots of bird chatter and happy people. You couldn’t have found a more perfect setting.

I’m so thankful I went to this concert.