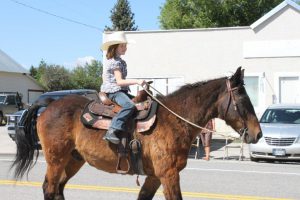 I really did take a lot of photos during the Dupuyer Grizzly Day parade.

This young gal looked so happy. Her horse looked very shaggy, it was probably the type of horse and I don’t know what that would be!

Anyway, her happiness was evident.

The parade route on US Hwy 89 in Dupuyer was probably about 7 blocks long. Everyone lined up on the north end of town right before the bridge.

Things started a bit late because the vehicle carrying the little yellow Shriner cars wasn’t there yet. Once it arrived, they unloaded those cute cars and these rather large Shriner guys clambered in. 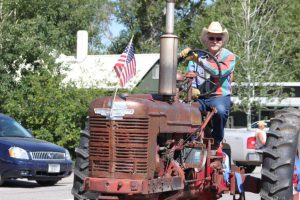 If I thought the young gal riding her horse looked happy, you should have seen this guy!

He was having so much fun with this antique tractor. The tractor seat bounced, the engine sputtered and I was watching to see what would come out of that upright exhaust pipe.

He looked mighty comfortable on this tractor.

A couple of things I noticed throughout the day – many of parade watchers knew most of the people in the parade.

Young and old alike, people knew which children belonged to which parent or grandparent. Extended families also gathered for this annual event. 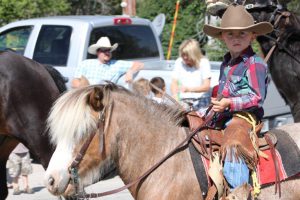 Wow! This young cowboy is serious. Or he is not happy with me taking his photo. I really think he was concentrating on riding this little pony in the Grizzly Day parade. Just a sidenote, I saw him later and he was pretty happy!

All in all, a real fun day in Dupuyer, MT.