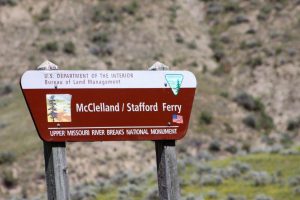 I drove to Winifred the other day and then took the gravel road from town to the McClelland/Stafford Ferry.

The ferry name is confusing – some folks say Stafford/McClelland, others McClelland/Stafford. I have decided it is based on whether you live north or south of the river.

The crossing is named after long ago operators of the ferry. It was established in 1921 and I can’t imagine what the road would have been like back then.

Today, the road from Winifred is a good graveled road and my tip of the week is to bring your binoculars because you just may see some wildlife.

I saw cows grazing a few miles north of Winifred, lots of birds and also three bighorn mountain sheep high up on a hillside, totally ignoring me. And yes, I was thankful I had 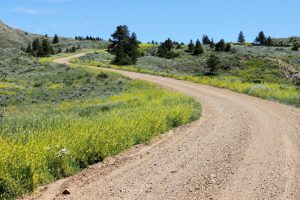 It’s about 16 scenic miles from Winifred to the ferry crossing.

Driving from Winifred north to the river bottom offers up more variety in terrain than you can imagine.

When you leave Winifred there are lush crops and then you gradually get to a pine forest with sage. Near Winifred you’ll have some rolling terrain but as you enter into the river breaks the hills are steeper and curvy.

The McClelland/Stafford ferry is not high-tech! As you approach the river’s edge there is an old mailbox and inside is a pager with instructions on how to call the operator.

Housing for the operator is on the north side of the river and two people share the job at the McClelland/Stafford ferry.

Although it is weather dependent, the ferries are usually put in the river in early April and taken out late October or early November, before ice forms on the river. 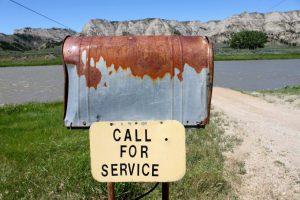 It was Father’s Day when I was at this ferry crossing, a lazy Sunday afternoon and lots of beautiful sunshine.

There was a large group launching to float the Missouri River down to Cow Island, a small group of canoes coming off the river and plenty of traffic crossing.

I watched to see if they were just out for a scenic drive but some were actually using the ferry crossing to save some miles.

I visited with a grandpa and his young grandson who, according to the oldest, were doing some family bonding.

There was also a professional photographer and his wife who just wanted to see the area and take some photos. 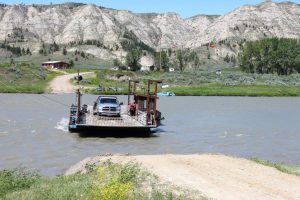 A few years ago new ferries were built but they look just like the old ones! The new ones are more efficient, probably a bit safer and have less maintenance. Each of the three ferries is attached to overhead cables to assist in crossing the Mighty Mo – a pretty sleepy river at times but not always.

The ferry operators work from 7am to 7pm to take folks like me – who just want to cross for the fun – and people who actually save a lot of miles by using the ferry crossing.

It is truly a step back in time to ride the river ferries and I encourage everyone to visit at least one of them.